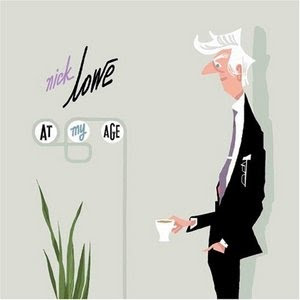 Pub rocker and prolific producer Nick Lowe ended a five-year hiatus from solo work in ’95; At My Age is the fourth studio LP of his new era and twelfth overall. Over a decade after repositioning himself as a debonair roots crooner, some clamor for the frantic new-wave rockabilly soul man of yore; those familiar with the breadth of his catalog know that it’s his newer work that ages better. While his previous LP, ’01’s The Convincer, benefited from a lush, smoky aura, At My Age is a trim, sharp set of stately skiffle, western-flavored vocal jazz, and an early-’60s country-pop vibe conducted so expertly it suggests Lowe would’ve been at home forty-five years ago in Nashville. An inveterate interpreter, Lowe tackles a handful of country covers ranging from the ’59 Charlie Feathers tune The Man in Love to closing track Feel Again, popularized in ’76 by Faron Young. Lowe’s sprightly acoustic guitar provides a base for most of the tracks, but the most unique aspect of the At My Age band is the horn section appearing on the bulk of tracks. Understated and low in the mix, it nimbly accents the songs, at times adding a nearly mariachi flavor without overwhelming the tunes. Lowe originals The Club and Hope for Us All are the finest here in a run of lovelorn, jovially self-deprecating numbers; People Change features lovely backing vocals from Chrissie Hynde; and the record’s best-known song, I Trained Her to Love Me, is a tongue-in-cheek account of the damages incurred by poorly managed serial monogamy. At My Age may make your grandmother dance, but it’s for good reason. Few artists age as well, and Lowe’s ’00s output is eminently more enjoyable than that of the artists he got famous producing.

Highlights: People Change, The Club, Hope for Us All