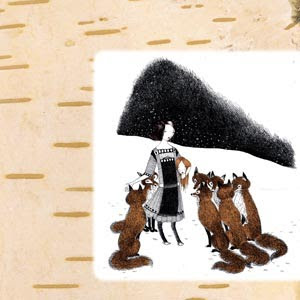 US singer-songwriter Neko Case got her start in toss-off punk bands, later crafting a singular writing style influenced by western honky-tonk but also encompassing soul, torch ballads, vocal jazz, and pop. The clarity and range of her remarkable voice (arguably reminiscent of Linda Ronstadt) makes her one of the era’s most compelling vocalists. After the juvenilia of Case’s punk work and ’97 cowpoke solo debut The Virginian, her talents have grown with every studio effort. Fox Confessor, her breakthrough fifth LP*, is the least country-oriented of her work thus far. The band features members of Giant Sand and Canadian group the Sadies, as well as the Band’s Garth Hudson and Flat Duo Jets guitarist Dexter Romweber. Case’s penchant for evoking animals’ tooth-and-claw nature is evident throughout, and the lyrics brim with alluring details—nightgowns sweep pavement, letters cascade down a staircase, eagles swoop down from semitrailers. A sense of reckoning and the opaque aspects of loss, disaster, and loneliness imbue the songs; when brighter times lie ahead it may be irrelevant, as with the narrator of That Teenage Feeling who “don’t care if forever never comes.” Case’s dynamic voice brings a sense of optimism and beauty to even the darkest moments. Fox Confessor is her first essential album, catapulting her beyond the alt-country ghetto and into songwriting’s big leagues.

*I include live '04 LP The Tigers Have Spoken in that count, as only one of its tracks has appeared on a Case studio album; the '01 Canadian Amp is an EP, not a full-length.

NOTE: Under no circumstances do I recommend the original gatefold vinyl pressing of this album on Lance Rock Records, and it receives a NOYOUCMON "do not buy" warning.  While I generally prefer vinyl to other formats, this first Lance Rock pressing of Fox Confessor is among the rare vinyl albums that I have found to be inferior to the compact disc version.  It sounds as if it were mastered from a digital source—if so, then it defeats the purpose of vinyl altogether—and has none of the warmth one expects from wax.  Additionally, my copy, purchased new, has numerous flaws that affect playback in ways that an untouched 180-gram vinyl pressing should not be affected.  Even casual vinyl listeners may be put off by the poor sound.  If you want to buy Fox Confessor Brings the Flood, please purchase it on compact disc or a legal download.  [UPDATE: Lance Rock has since issued another pressing, in a single-pocket jacket; I have not heard this version and thus cannot attest to its sound quality.]

Highlights: Margaret vs. Pauline; Hold On, Hold On; The Needle Has Landed

Read the NOYOUCMON mission statement here.
Posted by noyoucmon at 1:07 AM