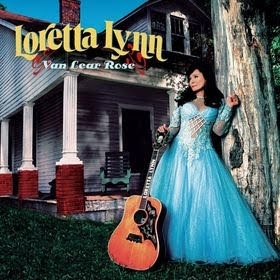 Country legend Loretta Lynn retired in 1993, having released nothing solely under her name since ’88. Only after her husband died in ’96 did she record the ’00 comeback album Still Country. Two years later, buzz band the White Stripes dedicated their White Blood Cells to Lynn. Intrigued, she reached out to the group, sparking a full-length collaboration released the week of Lynn’s 70th birthday to critical and popular acclaim. While White produced and organized the band (including two future members of White’s side band the Raconteurs), it is notably the first of Lynn’s 50-odd solo albums on which she wrote every song. The LP combines the Nashville country of Lynn’s heyday (Family Tree, This Old House) with heavier, rock-slanted numbers (Have Mercy, Mrs. Leroy Brown). Portland Oregon, a Lynn/White duet spiked with White’s blazing, Jimmy Page-inspired guitar breaks, depicts a romantic barroom encounter; the song’s dark eroticism is further charged by the singers’ 30-year age difference. Lynn is no stranger to controversial lyrics or the rougher side of life, and the album’s lyrics cover adultery and murder; more frequently here, though, they address topics like the simplicity of country life, God’s will, and the importance of home. In the autobiographical, spoken-word Little Red Shoes she tells an agonizing story about her childhood; in album closer The Story of My Life she gives a tongue-in-cheek overview of her life since marriage at 13. Van Lear Rose is a triumph, Lynn’s final record of the decade and one that makes its fans hope her comeback, like that of Johnny Cash’s, bears much more fruit.