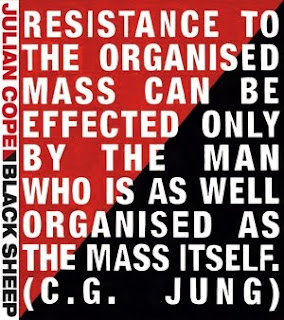 
Since his days as an ’80s new-wave star to his ’90s period as an eccentric activist lost in the major-label system, Julian Cope took a breather from pop to reengineer his politics and public image without disowning his past. His last widely distributed work, ’96’s Interpreter, was followed by a series of self-released experimental and meditational music. His first song-based studio LP in seven years, ’03’s Rome Wasn’t Burned in a Day, was a taste test for a run of four double albums he’d release under his own name in the Aughts on his private label Head Heritage. The music recalls the forms of his ’90s work, yet is marked by an even more radical political intellectualism while still often aesthetically lovely. The fourth and strongest of these, Black Sheep (not to be confused with his band Black Sheep, whom themselves released two double albums in ’09), is an indictment of religion. Cope espouses a hardcore paganism whose philosophies overlap with those of the black metal scene; instead of burning churches, though, Cope writes history essays and lectures at the British Museum. It would be hard to enjoy Black Sheep without a patience for the protracted drama of anti-Christianity pieces like Psychedelic Odin or The Shipwreck of St. Paul, but even without the patience one may be stunned at how catchy a jangling sing-along can still be when it’s called “All the Blowing-Themselves-Up Motherfuckers (Will Realise the Minute They Die That They Were Suckers).” Cope’s post-Sheep Aughts work does lean uncomfortably toward anarchism for my taste; but, he remains a fascinating polymath. Newcomers begin elsewhere; old fans take caution.

Highlights: All the Blowing-Themselves-Up Motherfuckers, These Things I Know, Psychedelic Odin

Read the NOYOUCMON mission statement here.
Posted by noyoucmon at 12:49 AM