Bubbling Under #115. Before the Poison 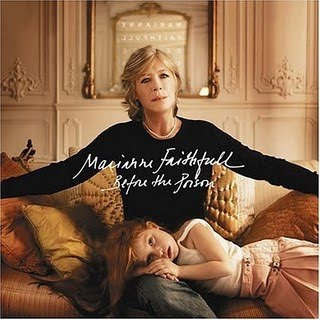 2004 marked Marianne Faithfull’s fourth decade in music. From her ’60s pop-folkie days and embroilment in the Rolling Stones coterie to the shattered disco majesty of ’79 comeback LP Broken English, her personal difficulties have lent her work a resolute gravitas. A writer when it suits her, Faithfull flourishes in collaboration; as with ’02’s Kissin Time, which placed her with Beck, Billy Corgan, Blur, and Pulp, her eighteenth LP Before the Poison aligns her with markedly younger alt-rockers, the bulk of it written by PJ Harvey and Nick Cave. Both trade in dark, emotional explorations and are natural pairings with Faithfull, resulting in a stronger record than its sometimes naff predecessor. No Child of Mine, which appears on Harvey’s contemporaneous LP Uh Huh Her as a one-minute acoustic snippet, is here a fully-fleshed number about the dissolution of family, Harvey’s harmonies wrapping ghostily around Faithfull’s coarse croon. My Friends Have, a mid-tempo rocker built on a dissonant Harvey riff, is an earnest ode to those who have “Always been there/To help me shape my crooked features . . . and pushed my enemies out of the picture.” The title track, lyrics by Faithfull, seems to describe the ruination by drugs and decadence of her ’60s teenage wonderment. Bacchanalian shouter and musical departure Desperanto finds Faithfull doing a sprechstimme rap about “the language of despair” to the rollicking chants and hoots of Cave and his Bad Seeds. Damon Albarn of Blur returns with one co-write, and the album closes with Jon Brion’s Weill-invoking City of Quartz, Faithfull’s vocals accompanied by a tinkling music box. It is a delicate comedown from the spectrum of loss and desire that composes Faithfull’s finest album of the Aughts and one of the finest works of any of her four decades.

Highlights: My Friends Have, Crazy Love, The Mystery of Love