Bubbling Under #123. That Lucky Old Sun 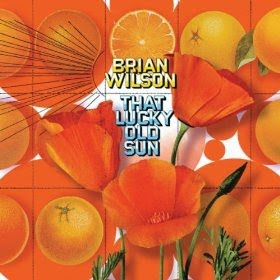 Brian Wilson’s solo output is overshadowed by the ’04 arrival of Smile, the legendary aborted follow-up to the 1965 Pet Sounds. His unfairly neglected next LP That Lucky Old Sun is a nostalgic love letter to his beloved hometown of Los Angeles. It opens with a cover of a 1949 Frankie Laine hit, giving the album its name and main musical theme. A blazing optimism buoys the songs, which address the city’s magical aura (Morning Beat, California Role) or deliver loving portraits of sun-kissed Angelenos (Good Kind of Love, Mexican Girl). Wilson does not ignore the present, but his L.A. is an often quaint postcard vision where Errol Flynn still exemplifies male fantasy. Forever She’ll Be My Surfer Girl is an explicit musical nod to the Beach Boys' heyday, an unavoidable subject that is elucidated lyrically in the closing tune Southern California. Most of the Smile band returns here (audibly freed from that mythical work’s pressure), and the bulk of tunes are co-writes with multi-instrumentalist Scott Bennett. Between songs, Wilson delivers narrations written by longtime collaborator Van Dyke Parks, dividing the record into five phases. The final phase is the most wisftul and introspective, addressing Wilson’s years lost to depression (e.g. Going Home’s oft-cited couplet “At 25 I turned out the light/’Cause I couldn’t handle the glare in my tired eyes”). While this is his second solo LP devoted to Golden State turf (see ’95’s also excellent Orange Crate Art), the boundless inspiration Wilson takes from the land he loves results in his most joyous music.

Read the NOYOUCMON mission statement here.
Posted by noyoucmon at 1:14 AM