Bubbling Under #118. Off My Rocker at the Art School Bop 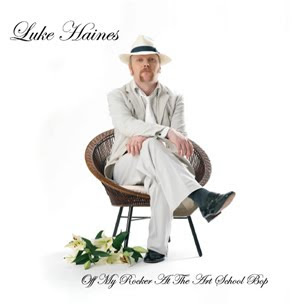 Sardonic pop diarist Luke Haines fronted unwilling Britpop figures the Auteurs through the ’90s; Rocker is his second proper solo album. His notoriously self-aggrandizing habits are matched only by an erudite writing style that serves as a gazetteer of post-WWII English cultural history sending US listeners scurrying to Wikipedia for explanations. Rocker examines the England of Haines’s childhood through the pre-punk ’70s. This is done most densely on the mildly sarcastic Here’s to Old England, which catalogs British life’s mundane aspects in the shadow of troubling newspaper headlines. As is typical, grim signposts are plentiful: allusions to two different serial killers; an examination of the pedophilic downfall of Gary Glitter in Bad Reputation; The Walton Hop is named for a teen disco known as a preying ground for sex offenders. For every such topic, though, there is a reference to football clubs or variety shows. In The Heritage Rock Revolution, Haines savages musical groups’ opportunistic reunions (“It’s been 25 years since you’ve had an original thought in your head”), the choruses ending knowingly with a riff from Foreigner’s “Hot Blooded.” The title cut is a throbbing electro-disco track that mocks the pretension of art students; otherwise, the album is more guitar-heavy than the bulk of his solo work. More cohesive than its predecessor (’01’s The Oliver Twist Manifesto), Rocker is also Haines’s most light-hearted work to date--no small accomplishment.

Highlights: Going Off My Rocker at the Art School Bop, Here’s to Old England, Fighting in the City Tonight

Read the NOYOUCMON mission statement here.
Posted by noyoucmon at 12:04 AM