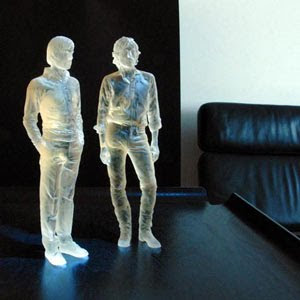 One could be forgiven if, while skimming their catalog, it was concluded that the French duo Air has recorded one very long album. Since their ’98 debut LP Moon Safari, Jean-Benoit Dunckel and Nicolas Godin have become masters of minimal, unhurried electronic music that uses acoustic instruments (usually guitar and piano) and often eschews percussion. Placid, filmic mood music can easily lack personality, but Air has transcended its limitations, crafting an elegant signature sound often complemented by Dunckel’s whisper-thin vocals. Their fifth album, Pocket Symphony (counting the ’00 score to Sofia Coppola’s film The Virgin Suicides), is notable for its Japanese musical influences and for being their sparsest, most subdued work to that point. The mournful One Hell of a Party, sung by Jarvis Cocker, addresses the starkness of morning-after regret to a melody carried by the harp-like koto and guitar-like shamisen. The album’s other guest vocal, Somewhere Between Waking and Sleeping, sung by Divine Comedy frontman Neil Hannon, is equally doleful. Several songs employ mantra-like lyrics, including the record’s most energetic piece, the propulsive Mer du Japon, whose sole lyric is a repetition (in French) of “I lost my mind/On the Sea of Japan.” Instrumentals Space Maker and Mayfair Song boast austere yet sublime Dunckel piano work. Air would take a successful turn toward livelier, rock-influenced forms on their next effort, ’09’s Love 2; the stark Pocket Symphony remains the most graceful in Air’s first decade of LPs.

Highlights: Mer du Japon, Napalm Love, Once Upon a Time

Read the NOYOUCMON mission statement here.
Posted by noyoucmon at 2:09 AM