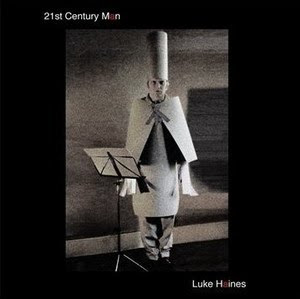 Auteurs frontman and pop diarist Luke Haines was the enfant terrible of Britpop, earning a reputation as a self-aggrandizing heir to the Fall’s Mark E. Smith, though with a penchant for erudition and withering analysis rather than abstruse ranting and lager consumption.  The Auteurs having disintegrated in ’99, Haines eased into solo work with the ’01 soundtrack to the Paul Tickell film Christie Malry’s Own Double Entry (see #101); notwithstanding his solipsistic but dazzling ’03 re-recordings of the Auteurs’ high points on the wry self-celebration Das Capital: The Songwriting Genius of Luke Haines and the Auteurs, Haines’s Aughts work saw his narcissistic qualities fade with age.  A few months before 21st Century Man, he issued the ’86-’97 autobiography Bad Vibes: Britpop and My Part in Its Downfall; its introduction states: “When I sat down to write this memoir I was surprised how much of this stuff was ricocheting about in my subconscious: youth, ambition, failure, depression, excess, spite and stupidity. Now I think it has stopped. I am a recovering egomaniac.”

21st Century Man, like its predecessor Off My Rocker at the Art School Bop (’06; see #118), still encompasses criticism of middle-class life and its weaker-minded participants, societal conditions in England, historical overviews of post-War culture, and himself.  While Rocker depicted ’70s England, 21st Century Man works as a millennial-era assessment informed by the past.  The record opens quietly with Suburban Mourning, a mid-tempo account of a neighborhood so happy that a couple of “Satanists” don’t even feel comfortable there, where people live and die never knowing how bland their lives are.  The lilting Love Letter to London, as pretty a ballad as Haines ever recorded, addresses those who have babies and move away (“We’ll not see them again/It’s just like the Blitz, the countryside groans with the stress and the strain”).  “They said that they loved you/But they used you as a playground/When they were young,” Haines sings, resentful of those who hedonistically suck the city dry before abandoning it when they feel like growing up.  The two-minute oddity White Honky Afro is the catchiest tune here, a tale of a 1979 accident in which Haines was hit by a car and the subsequent unrelated suicide of the driver’s son; the repetitions of its title in each chorus provide the record’s catchiest hooks.  The title track is the album’s finest number, a personal account of post-war 20th Century Britain where “they tried to give us a collective memory” through culture, politics, and folklore, though “now everything’s turned to dust.”  It contains the most stunning line of Haines’s career: “What can you do when you’ve made your masterpiece?/That’s what I did in the Nineties/I was all over the Nineties/Yeah, I was all over in the Nineties.”  In admitting that his star fell over ten years ago, the man who outrageously reviewed his own catalog in the liner notes of Das Capital, giving six of eight albums a five-star ranking, managed to seal up his finest album in a decade with one of the greatest songs of his career.