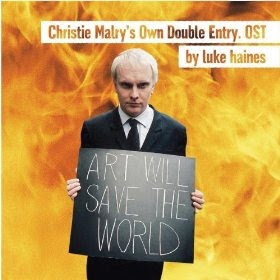 By 2000, Luke Haines’s cantankerous Britpop counteragents the Auteurs appeared all but defunct. Their ’99 LP How I Learned to Love the Bootboys and its self-referential, career-assessing lyrics was preceded by the ’98 debut of Black Box Recorder, a group fronted by Sarah Nixey but featuring Haines as musical director. It was confirmed with his first two solo works in the summer of ’01--the Christie Malry soundtrack and, one month later, the regular studio outing The Oliver Twist Manifesto--and the Auteurs name would surface again only on compilations. Working on someone else’s vision would seem anathema to Haines, but the plot of Christie Malry--based on a ’73 B. S. Johnson novel about a man who vengefully applies bookkeeping protocols of credit and debit to his life, resulting in anarchy and terrorism--is ripe material for the spleenful Haines. Like many soundtracks, Malry contains numerous instrumental passages; a sultry, pulsing, seven-minute version of Nick Lowe’s I Love the Sound of Breaking Glass is Haines’s first cover*; closing track Essexmania is, even if only out of sarcasm, a thumping club raver. Discomania, a slashing, oblique overview of Malry (“I’m anti-everything,” “I like people when they keep their mouths shut”) trounces the version that appears on Oliver Twist; in fact, Malry bests its follow-up altogether and, despite its incidental filler and appeal likely restricted to Haines followers, is a rare soundtrack that bears repeated listening. It is easy even for fans to dismiss an artist’s soundtrack work, but Christie Malry’s Own Double Entry includes material essential to the Haines/Auteurs cosmology.

*Prior to the recording of I Love the Sound of Breaking Glass, on the '98 album England Made Me, Haines's group Black Box Recorder did record a cover of Althea & Donna's 1977 song and 1978 UK hit Uptown Top Ranking.  Haines plays on the recording; however, as it is sung by Sarah Nixey and not Haines I do not consider it to predate I Love the Sound of Breaking Glass as his first cover version.

Highlights: Discomaniax, Discomania, I Love the Sound of Breaking Glass