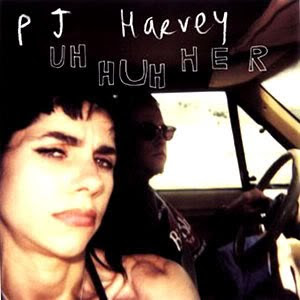 The dissonant, tarpit-slow riff that opens PJ Harvey’s sixth* studio album Uh Huh Her sounds like the dragging knuckles of a dimwitted proto-man; the LP’s title, like something he might mutter. The cover picture is an intentionally unflattering snapshot of Harvey sitting in someone’s car, as if about to drive off somewhere unsavory. The twilit beauty of her previous album, ’00’s Stories From the City, Stories From the Sea, departed strikingly from her typically raw approach; in return, Uh Huh Her is her most fractious, confrontational album of new work since ’93’s Rid of Me. The gentler moments’ explorations of insular, uncomfortable emotions are as unnerving as its bellicose, hard-featured aspects. Produced and performed by Harvey alone (less the drums and some backing vox), the album is less a confessional than a glimpse of secret thoughts. The lyrics deal more frequently than usual with the specter of lovers, summarized well by the title of The Desperate Kingdom of Love. In The Letter she pictures a lover closely examining a handwritten note, admiring “In my handwriting/the curve of my ‘g’,” and imagining, erotically, him licking the envelope when sending his reply. Conversely, Cat on the Wall finds its narrator compulsively and anxiously replaying a saved voicemail when she hears “our song on the radio”; the angst peaks with the angry threats of Who the Fuck? The closing number The Darker Days of Me & Him summarizes manhood with a shortlist of neurosis, psychosis, psychoanalysis, and sadness. Uh Huh Her is Stories From the City off its meds, contemplative, and ashamed yet determined. The two disparate albums constitute her finest work of the decade.

*If you don't count '93's 4-Track Demos, which I don't because 60% of it is songs from Rid of Me; seventh, if you count her first album-length collaboration with John Parish, '96's Dance Hall at Louse Point.

Highlights: The Letter, The Life & Death of Mr. Badmouth, Shame

Read the NOYOUCMON mission statement here.
Posted by noyoucmon at 12:46 AM