Bubbling Under #103. The Convincer 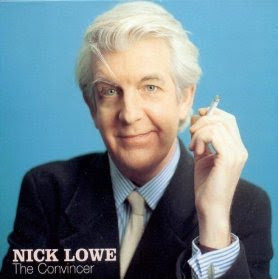 The birth of Nick Lowe’s third career phase is well documented. Lowe’s first Aughts release, The Convincer, was his first for indie home for the aged Yep Roc and the third in what he would later dub the Brentford Trilogy, along with The Impossible Bird (’94) and Dig My Mood (’98). With these albums, he abandoned frantic rock and roll and repositioned himself as a gentlemanly balladeer. On Mood, he began shifting his focus from roots music to genteel crooning reminiscent of Sam Cooke; this new style dominates The Convincer. Slinking opening cut Homewrecker sets a misty, rhythm-and-blues tone; its sparse arrangement emphasizes Lowe’s voice, placed high in the mix. The subject matter familiarly relies on gently self-deprecating and optimistic stories of moral failures and deficiencies in love. The man in I’m a Mess believes he will one day “quit this blue address,” but abandoned by friends and lovers he’s not sure when. Between Dark and Dawn advises another jilted soul to “Wait ’til the sun comes out/You’re gonna wonder what the fuss was about.” The bachelor of Lately I’ve Let Things Slide admits, “Smoking I once quit/Now I’ve got one lit/I just fell back into it.” The finest song, Cupid Must Be Angry, has a lush arrangement with a double-tracked Lowe vocal and dazzling treated trumpet solo by Wayne Jackson.  Casual listeners will likely find Lowe’s post-’94 work a blur of the same stylistic ground. Each album is worth closer examination, but The Convincer is the finest; and, as fun as his ’80s work may have been, Lowe’s modern style will undoubtedly have a longer shelf life.

Highlights: Cupid Must Be Angry, Lately I’ve Let Things Slide, Only a Fool Breaks His Own Heart

Read the NOYOUCMON mission statement here.
Posted by noyoucmon at 1:28 AM