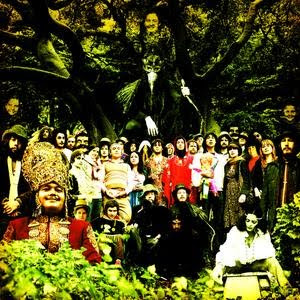 Influential ’04 compilation LP The Golden Apples of the Sun chronicled the decade’s psychedelic-informed acoustic, or “freak folk,” scene, its half-Texan, half-Venezuelan compiler Devendra Banhart serving as the subgenre’s unofficial leader. Banhart’s ’02 debut* Oh Me Oh My is certainly freaky--its brief voice-and-guitar numbers are bizarre and spooky; on songs like Nice People, the 21-year-old Banhart sounds downright unhinged. Alongside Apples, he released two solo albums in ’04; glossier than his debut yet still simple guitar-and-voice affairs, they remain relatively eccentric yet show him to be more than a willfully bizarre outsider. His fourth LP, Cripple Crow, includes his first full-band recordings. Nearly two dozen musicians contribute, and the result is the most welcoming and enjoyable of Banhart’s six Aughts LPs. At 74 minutes and 22 songs (and another eight on its vinyl version), Crow can be a trying exercise. The sprawling work comprises Spanish-sung folk (Santa Maria da Feira, Quedateluna), ’50s doo-wop (Little Boys), fuzzed-out psych funk (Long Haired Child), groovy singalongs (Chinese Children, I Feel Just Like a Child) and plenty of oddball sketches (The Beatles, Dragonflys); less novel yet perhaps more gripping, though, are the aching ballads (Korean Dogwood; the title cut) that provide breathing room from the album's nuttier moments. A glance at the song titles show a preoccupation with childhood, and Banhart’s lyrics make frequent literal reference to the womb. Detractors complain understandably that Banhart needs an editor; but, on Cripple Crow he is at his most playful, sincere, and free, creating the perfect distillation of his personal aesthetic and his musical community.

* Banhart did record an album prior to Oh Me Oh My; 2002's The Charles C. Leary, on the Hinah label, had extremely limited availability and is long out of print.  As such, the Young God-released Oh Me Oh My, which benefited from national distribution, is generally regarded as his debut.