Bubbling Under #102. Sometimes I Wish We Were an Eagle 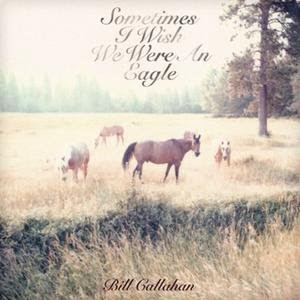 Bill Callahan spent fifteen years making esoteric, folk-derived music under the name Smog, issuing eleven LPs and seven EPs. The early works are nearly outsider music--willfully lo-fi, avoiding typical song structure, recorded alone under wildly deficient conditions. Smog grew to be more professional, collaborative, and dynamic; a scan of the catalog, though, finds many deadpan, dirge-like meditations sung in a jarring baritone and not lacking in humor but emphasizing the desolate. With Woke on a Whaleheart, (’07), Callahan began using his own name. The LP continues with the fuller instrumentation, but also the occasional tunelessness and meandering. With the follow-up, Sometimes I Wish We Were an Eagle, Callahan evinced a remarkable leap forward, creating an engaging, warm set of songs surely among his best works. Recorded with a full band and adorned with subtle strings, French horn, and drums where Smog may have ambled percussionless, it is earthy yet elegant, recalling the soulful country of Nashville group Lambchop. The sonic warmth betrays the lyrical ruminations: “I am a child of linger on,” he sings in The Wind and the Dove; “Show me the way/To shake a memory,” begs the narrator of the comical Eid Ma Clack Shaw. Nature is prominent; birds, wind, and trees populate the songs. The album’s closing track is the ten-minute Faith/Void, a contemplation of gnosticism in which Callahan presents his proposal and conclusion at once: “It’s time to put God away/I put God away,” repeats the verses. It is a striking way to end an album filled with temporal concerns. Smog is dead; long live Callahan.

Read the NOYOUCMON mission statement here.
Posted by noyoucmon at 1:39 AM