Bubbling Under #104. Journey to the End of the Night 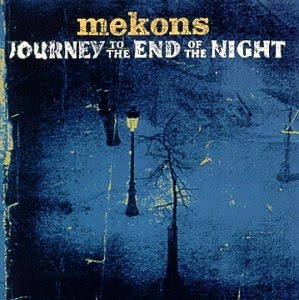 104. Journey to the End of the Night, Mekons (Quarterstick, 2000)
It is pushing it to call Mekons a punk band thirty years after their birth at a Leeds art school. Their ’04 album Punk Rock featured reworkings of their ’70s material, a nostalgic lark alongside their later work that has long taken influence from American country music, English folk, and Jamaican rhythms. Mekons began the Aughts with 14th LP Journey to the End of the Night, its nocturnal themes of paranoia, dread, and lucklessness miles away from the ribald studies of sexuality on their prior record, Me (’98). Journey brims with anxiety: in Neglect, the narrator stands before a mirror, nauseated, practicing asking for £10,000.  In Last Weeks of the War, Jon Langford sings “I wipe the tapes but they keep playing/They haunt me another day.” The song title Tina refers to no woman but to an acronym for “there is no alternative.” Phone numbers are lost during fights, people appall themselves with impulsive confessions, and life flashes before the eyes “in the most unsatisfactory way.” Love is mentioned only as furtive or a source of agony. The band plays in hushed tones, not entirely acoustic but capturing the wee-hour loneliness of the cover image. Sally Timms practically whispers her lead vocals. For all the gloom, the music is not without joy; the closing tune, Last Night on Earth, boasts the album’s most jubilant arrangement while lyrically alluding to suicide. No mere retort to their live reputation as a reckless troop of jesters, the melancholy world of Journey gives voice to Mekons’ inward travels and sleepless dawns.
Highlights: Tina, Neglect, Powers & Horror