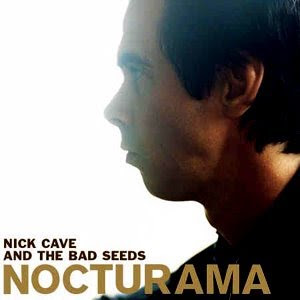 After the ’96 throat-clearing of the grimly themed Murder Ballads, Nick Cave produced two successive albums of somber, mournful songs departing steeply from the frenetic rock arrangements enlivening his earlier work with the Bad Seeds and the sonic terrorism of his previous group the Birthday Party. Cave famously opens ’97’s The Boatman’s Call by intoning “I don’t believe in an interventionist God,” and its ’01 follow-up No More Shall We Part is only marginally more dynamic than Boatman’s melancholy explorations. The albums provide some of the most beautiful songs in Cave’s catalog; but, they are lengthy and proceed at a funereal pace and make for draining listening experiences.

On his twelfth studio LP with the Bad Seeds, Cave adjusted the formula. Nocturama retains the slow, earnest piano ballads but juxtaposes them with raucous, full-tilt rock numbers. This can be jarring, especially if not listening on vinyl; it is an unusual Aughts album in that its sequencing seems to have considered the side breaks of a phonograph record. Side one begins with three pieces reminiscent of No More Shall We Part. He Wants You is an aching account of a man who “is straight and he is true”; making it more aching is the benighted male certainty that his love alone is enough to sustain it for two. Right Out of Your Hand contains some of the album’s most vivid imagery (“airborne starlings circle/over the frozen fields”) and a protagonist as misguided as his predecessor; “Give a sucker an even break/he’ll lose it all every time,” Cave sings, before admitting that “you’ve got me eating/right out of your hand.” Bring It On follows, a duet with Chris Bailey of fellow Australian punk veterans the Saints that blossoms slowly into an impassioned arrangement unlike any that Cave attempted since the mid-’90s. Like much of Nocturama, it is emboldened by the fiery violin work of Warren Ellis. Even after flipping the record, side two’s opening cut Dead Man in My Bed is like a finger in a socket after the gentle evolution of side one. Its frantic, clattering sound sits awkwardly before the rest of side two, which is a mirror image of side one and whose highlight is another ballad of romantic loyalty, Rock of Gibraltar. The original double vinyl had a blank fourth side; side three is consumed by the 15-minute Babe, I’m on Fire, a breathless, demented rant echoing the fever pitch of Dead Man in My Bed yet three times as long. Boasting an outrageous 38 verses, it is a litany of bizarre characters from “the backyard abortionist” to “my mate Bill Gates,” all of whom exist only to concur with Cave’s crazed testimony of “babe, I’m on fire.” It is a novelty whose relegation to the vinyl’s side three makes it a de facto bonus track, but it is an exhilarating novelty that foreshadows the frenzied tone of Cave’s later Aughts work with the Bad Seeds and his side project Grinderman. Nocturama’s schizophrenic nature raised some hackles among Cave fans (perhaps including longtime Bad Seed guitarist Blixa Bargeld, who resigned after recording) and while it does scan less evenly than its two predecessors it is a more enjoyable listen.

Highlights: Right Out of Your Hand, He Wants You, Rock of Gibraltar, Bring It On

Sublime bit: 3:30-4:15 of Right Out of Your Hand, as Cave’s voice entwines with the Bad Seeds’ backing harmonies, his voice pitching up at 4:09.