53. From Here We Go Sublime 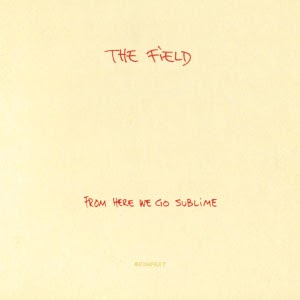 The Field is Stockholm’s Axel Willner, whose instrumental pieces merge moody, ambient atmospherics with the sparse, rhythmic repetition of minimal techno and trance.  His pieces inhabit narrow ranges of tempo and modulation with a focus on cyclic grooves that do not always achieve resolution, sometimes simply fading out after a period of time.  Willner occasionally employs glitch techniques, rhythmically utilizing sonic aberrations that resemble equipment malfunctions; but, his compositions are primarily smooth, hypnotic exercises with a moderately high beat-per-minute ratio.  The mix of ambient soundscapes and upbeat dance-floor vibrations creates a dreamlike effect.  Key to Willner’s music is his use of extremely brief samples—sometimes under a second long—that he manipulates and loops, creating new melodies that frequently become foundations of the tracks.  He often samples other artists’ singing, perhaps only a single syllable or vocal sound.  One of the earliest Field tracks, Action (from his label’s ’05 Kompakt 6 compilation), is built on a sliver of the flute introduction to Reach Out I’ll Be There by the Four Tops.  While it is possible to hear the song as an original techno track and not recognize that it contains a sample, its use of a well-known sound lends it an extra subconscious resonance that can be haunting.  After his first recording, an ’05 remix of Norwegian electro singer Annie, Willner released his first 12” as the Field, Things Keep Falling Down, and the aforementioned Action.  Even before this, he had begun work on the tracks of his debut album; there would be another 12” and two more label samplers, however, before From Here We Go Sublime.

Over the Ice opens the LP with a minimal disco pulse that is not fleshed out until nearly its fifth minute.  A manipulation of a vocal sample provides the song’s melody; it is looped in such a manner that, until an undeniably electronic pitch shift occurs, it sounds like a woman singing wordlessly.  One may listen for years, as was true for this writer, before recognizing it as a syllable taken from a Kate Bush record.  A Paw in My Face begins with a similarly throbbing beat and a synth hi-hat cymbal before the percussion is emboldened and a feather-light guitar accent begins to repeat.  In one of only two explicit revelations here, Willner lets the guitar sample play out as the song fades, showing it to be from Lionel Richie’s ’83 hit Hello.  This is devoid of irony or humor, and the original loop provides one of Sublime’s most genuinely appealing hooks.  The samples do not overwhelm the songs; The Little Heart Beats So Fast, one of the album’s most playful arrangements, is propelled by an infinitesimal snatch of sound that sounds like a woman gasping “ahh,” but could easily just be synthesized percussion.  In Everday [sic], a vocal sample begins at 4:45 that runs at a slightly different tempo than the rhythm, creating an entrancing warp of sound as the song builds and the two parts go, almost imperceptibly, in and out of sync with one another.  The album’s most astonishing moment comes with the glitch-heavy, closing title track.  Composed almost entirely of a ghostly set of samples, it sputters and reverberates for over two minutes before Willner undoes the straps to reveal a reverb-laden passage from the Flamingos’ 1959 doo-wop classic I Only Have Eyes for You.  While Kate Bush and even Lionel Richie are easily understandable touchstones for an Aughts-era indie musician, the revelation of this relatively ancient source material is an astonishing way to close the album.  After this debut LP, Willner remixed over a dozen other artists, and in ’09 issued a second album, Yesterday and Today, incorporating other musicians and full vocal tracks. Any of Willner’s works is worth attention, though Sublime remains his strongest to date and one of the finest techno albums of the decade.

Highlights: A Paw in My Face, Everday, Silent, The Little Heart Beats So Fast

Sublime bit: The Flamingos’ haunted doo-wop is mind-blowing in this context; but, the silvery guitar wisps of A Paw in My Face are truly sublime.

Read the NOYOUCMON mission statement here.
Posted by noyoucmon at 2:54 AM