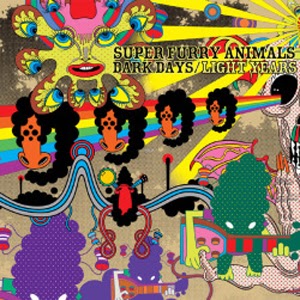 The eighth album by Welsh quintet Super Furry Animals, Hey Venus! (’07; see #65), was the psych-pop group’s first on the Rough Trade label.  Its streamlined blast of uptempo glam and the odd lovely ballad came at the new label’s behest, hoping for a return to the efficient vibe of the group’s ’90s work.*  The tour that followed the album’s release was another stripped-down affair, the band cutting back on the props and stage dressing that made previous jaunts quasi-theatrical affairs.  The willingness to tailor an LP to a record company’s desires might have been an ominous sign had the result not been one of the group’s most enjoyable records to date.  Following Hey Venus!, drummer Daf Ieuan released his first album with side project the Peth and frontman Gruff Rhys issued Stainless Style, a collaboration with producer/programmer Boom Bip, credited to Neon Neon and ostensibly a concept record about eccentric automotive engineer John DeLorean.  These solo detours, both on other labels, were evidence that Rough Trade would not strong-arm the band or its members into a specific vision.  When the Super Furries regrouped to record their ninth LP, the sessions would culminate in their most stretched-out, challenging vision yet.

At just over an hour, Dark Days/Light Years is practically twice as long as Hey Venus! and the longest SFA album to date; on vinyl, it is a double LP (though running at 45 RPM) whose garish artwork—a collaboration of the group’s two previous art designers, Keichi Tanaami and Pete Fowler—sprawls across both sides of its gatefold jacket and a two-sided 24x24 poster.  While its predecessor opened with a rollicking 43-second introductory theme, Dark Days slowly gurgles its way to the surface.  Opening cut Crazy Naked Girls begins with 51 seconds of muffled speech, the sounds of tuning up, and a false start before an overdriven drum beat kicks in, followed by a clipped, nearly falsetto Rhys vocal recalling Prince before abruptly changing at midpoint into an acid-rock blues jam that churns like an extended outro for the remainder of its six minutes.  Once through this virtual decoy the album returns to more conventional songwriting, soon making it clear that Dark Days is a groove-heavy affair. Several songs (most notably Moped Eyes and the nuttily titled The Very Best of Neil Diamond) are propelled by slinking arrangements worthy of the dance floor, even if the tempos remain at a low simmer.  The eight-minute Cardiff in the Sun is the album’s centerpiece, its Kosmische chillout groove giving way to blissful choruses consisting of its repeated title.  The album’s extended runtime means there is enough room for a handful of pop tunes, the best among them the pulsing jack-in-the-box rhythm of Inaugural Trams whose middle eight consists of a rap, in German, by Nick McCarthy of Franz Ferdinand.  Against all odds, it is one of the album’s best moments.  Another key pop track finds guitarist Huw Bunford taking lead vocals, the hideously titled yet wonderfully catchy White Socks/Flip Flops.  The record ends as oddly as it began, though, with the ten-minute Pric, a throbbing rock groove that trails off at roughly six minutes for an extended ambient coda.  A daunting listen on first blush, the album contains all the hallmarks that make Super Furry Animals one of the most inventive and charming pop groups of their time.  While not as immediate as their previous works, Dark Days/Light Years sustains repeated plays better than most of the band’s catalog once its rhythmic secrets are unlocked.

*For just one account of the Rough Trade request, see this Gruff Rhys interview: http://www.tinymixtapes.com/features/gruff-rhys-super-furry-animals

Sublime bit: When Inaugural Trams slams back into its peppy groove after Nick McCarthy’s spoken guest vocal ends at 3:24.

Read the NOYOUCMON mission statement here.
Posted by noyoucmon at 1:25 AM