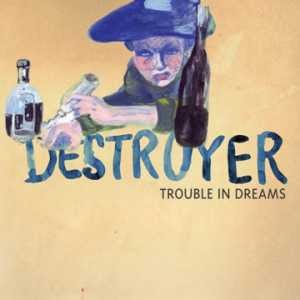 By the time of his final full-length album of the decade, Vancouver singer-songwriter and Destroyer bandleader Dan Bejar had come a long way from the four-track adventuring of his ’90s work.  The Aughts saw Bejar release six Destroyer full-lengths and a pair of EPs, as well as four albums as a member of the New Pornographers and two with Swan Lake (see #91).  Even just since his previous Destroyer album, the ’06 breakthrough LP Destroyer’s Rubies, Bejar made substantial contributions to four different groups’ records, including performing the bulk of instrumentation on girlfriend Sydney Vermont’s ’08 album (credited to Hello, Blue Roses) The Portrait Is Finished and I Have Failed to Capture Your Beauty.  If one looks only at the Destroyer material produced in the Aughts, the catalog reveals a series of ambitious and complex works: from his first masterwork Streethawk: A Seduction (’01, see #66) to the bold musical theater of the synth-heavy ’04 Your Blues and beyond, Bejar has repeatedly shown himself to be one of the decade’s strongest and most literate songwriters.  His prolificacy and willingness to work as a secondary on other people’s albums have afforded him an ongoing opportunity to hone his writing and performance, and a sequential examination of his Aughts output also shows one of the decade’s most significant progressions in pop craftsmanship.

Trouble in Dreams came after a sequence of Destroyer albums sprawling in construction or thematic in execution; while its running time almost matches the nearly hour-long Rubies, Bejar’s ’08 effort feels like the first streamlined collection of Destroyer songs since Thief in 2000.  While Bejar and Destroyer may seem synonymous, the project has been a group effort since ’98; its lineup has shifted progressively, though, and Trouble marks the first time in six years that Destroyer’s roster survived nearly intact from its previous record.  Only longtime drummer Scott Morgan is missing, replaced here by Fisher Rose (who played vibes and trumpet on Rubies).  As with most of Destroyer’s albums, Trouble was recorded at Vancouver’s JC/DC Studio with David Carswell and Paul Collins co-producing with the band, the latter one of Bejar’s New Pornographers bandmates.  The album’s production is warmer than any of its predecessors, a departure from the ragged live feel of Rubies; most of its songs are slow-burning, sometimes almost sensuous ballads.  The subjects often seem burdened by fatigue, concession, and a wish to get things over with; the album’s opening line is “Okay, fine,” the narrator of Blue Flower/Blue Flame concluding “A gray ashen sadness rises like the sun, oh well.”  My Favorite Year recalls halcyon days before a blunt reminder that “now it’s gone.”  The protagonist of Shooting Rockets, the album’s eight-minute centerpiece, whose “soul pukes,” finds lightness only in dreams because he has “street despair carved in my heart.”  These songs are cloaked in bewitching arrangements that temper the gritty accountings of the lyrics.  The State and Plaza Trinidad provide noisy interludes, delivering percussive crescendoes that provide sonic reminders of the characters’ emotional stress.  Only on My Favorite Year and Dark Leaves Form a Thread does the mood approach ebullience; even then, though, the narrator is ambivalent: “No, it’s cool, you go, I’ll stay,” Bejar sings on the latter, “perfectly at home with this dread.”  On its lyrical surface a potential gloom trip, Trouble in Dreams is Destroyer’s most sonically beautiful album and another gem in the catalog.

Sublime bit: Introducing Angels: its lush arrangement, Bejar’s hushed intonation of its title, and the silvery guitar riff slipping through its choruses.