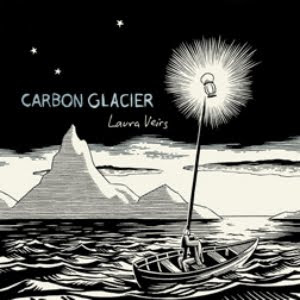 At the end of the Aughts, Pacific Northwest singer-songwriter Laura Veirs had made a sparkling pair of pop-rock albums with her group (known first as the Tortured Souls and then renamed Saltbreakers for her sixth LP of the same name), but she began the decade as a folk-based artist fresh off her rough-hewn debut album (Laura Veirs, ’99).  Her first Aughts LP, The Triumphs and Travails of Orphan Mae (’01), is a country-tinged acoustic song cycle about a woman journeying through the Western U.S.; its ’03 follow-up Troubled by the Fire is a largely gentle roots album, marking Veirs’s first prominent use of a full band and, though sparingly, a foray into the rock forms she would embrace more vigorously on later works Year of Meteors (’05, see #62) and Saltbreakers (’07).  Each of her Aughts LPs—all produced by drummer/programmer Tucker Martine—evidences considerable stylistic development, yet the most arresting of her first six albums is her ’04 major-label debut Carbon Glacier.

The album possesses a chilly ambience, many of its songs creating stark and haunting moods suggestive of its cover art’s frozen vista.  While Troubled by the Fire revealed Veirs’s interest in more aggressive arrangements, Carbon Glacier is a hushed affair, emphasizing her strengths as a folk singer yet adorning the acoustic material in a web of minimal electronics that sound more progressive than any of its predecessor’s revved-up efforts.  Veirs’s singing voice, like her composition and production, has developed over time; on Carbon Glacier, though, its idiosyncrasies—recalling the thin-ice overreaching of Guyville-era Liz Phair—add further to the distinctive sonics.  Though a wintry atmosphere runs through the album, it is not a purely bleak one; instead, the arrangements often conjure the crisp, quiet beauty of a moonlit blanket of snow.  This is best evident in the opening song, Ether Sings.  Veirs’s introductory midtempo guitar figure lasts only four measures before it is joined by an eerie, airy synth line, sounding almost like a theremin, that drifts away as quickly as it appeared; “Come with me and we’ll head up north/Where the rivers run icy and strong,” Veirs sings.  After a pair of verses, the song returns to the original guitar and synth melody, joined by a muted viola pattern and a ghostly and beautiful falsetto of “aah-ha, aah-ha” that repeats for the final ninety seconds.  Perhaps even starker is Icebound Stream, whose attractively lurching, repetitive melody sounds as if born of a hurdy gurdy whose batteries are running low.  Veirs’s voice is high in the mix; the lyric, sung in a similarly mechanical rhythm, is a fever dream of anthropomorphized lightning that makes flowers bloom in reverse and photographs fade to white.  The contemplative ballad Rapture marvels at the way humans capture art in permanence, “with photographs and magnetic tape,” and wonders if “love of color, sound and words/is it a blessing or a curse,” citing Kurt Cobain and “young Virginia Woolf/Death came and hung her coat.”  Shadow Blues depicts a lover frightened by her own feelings: “I’ve learned that love is scared of light,” Veirs sings, describing a “blackened kiss” and a protagonist who admits “I am dark about the whys of wanting” before vowing to “dig a coal mine, climb down deep inside/where my shadow’s got one place to go.”  The sonic tension is lifted only on The Cloud Room, an upbeat pop number with a near-funk drumbeat, presaging her later Aughts work.  Carbon Glacier is an album keenly aware of the dangers of nature, the unrest that can lie just behind beauty, and the loneliness of time.  From its vulnerable atmospheres comes the best work of Veirs’s first ten years of recording.

Read the NOYOUCMON mission statement here.
Posted by noyoucmon at 1:55 AM