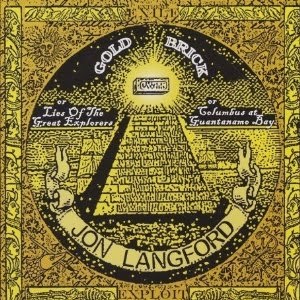 Chicago-dwelling Welsh expatriate Jon Langford is one of rock’s most prolific artists.  While perhaps best known as a member of the Mekons from the Leeds punk class of ’77, Langford has made nearly three dozen albums with his other groups the Three Johns (’82-’90), traditional country collective the Pine Valley Cosmonauts, and cowpunk sextet Waco Brothers, as well as a multitude of collaborations with other songwriters.  Along with his tireless musical schedule, Langford is an accomplished visual artist; his paintings often depict other musicians, particularly the country and western acts who have inspired his own music since the Mekons shifted away from punk in the late ’70s.  Not until ’95 did Langford get around to issuing an LP under his own name; Misery Loves Company—credited to “Jonboy” Langford, along with the Cosmonauts—is a ramshackle but loving set of Johnny Cash covers (like his painting, Langford’s music often celebrates country artists).  With ’98’s Skull Orchard, a pop-tinged set of songs in honor of his Welsh homeland, Langford delivered his first true “solo” album, not hinging on collaboration or homage.  He would issue three more in the Aughts; works like Mayors of the Moon (’02, backed by Canadian alt-country group the Sadies) and All the Fame of Lofty Deeds (’04) are serviceable roots-rock albums melding cuttingly literate writing, amiable humor, and a keen insight to America’s cultural landscape. Langford’s next solo work, though, would take a confident and ambitious stride forward.

For Gold Brick, Langford took temporary leave of his usual solo label Bloodshot for NYC imprint ROIR, which had previously released Mekons and Three Johns one-offs. Subtitled Lies of the Great Explorers, or Columbus at Guantanamo Bay, it is an examination of post-9/11 American malaise and the impacts and shifting priorities of globalization.  Its first half focuses on individuals: the subjects of Little Bit of Help are “programmed for survival”; Workingman’s Palace chronicles the pressing need for escape, usually “where the Old Style light still shines”; Invisible Man illustrates regular folks’ 21st-century uncertainty, overlooked “like a pin in a map or dust on the screen.”  The title track addresses modernity’s solitude (“You leave home but you never leave home/Drive for miles in a car on your own”) and bland conformity (“The boring and phony/Are rocks for the lonely/To climb up on.”).  The second half dissects the U.S. mise en scène: Gorilla and the Maiden depicts Cold War Chicago’s incongruities of strip joints, Nazi marches, and investors who “paw at a city served up in chains”; Tall Ships imagines the vessels that carried many to the New World, now simply “carrying cargo/that nobody needs.”  An orchestrated cover of Procol Harum’s ’69 tune Salty Dog bridges the halves, in this context another depiction of immigration.  The finest piece is closing track Lost in America.  Composed for National Public Radio’s show of the same name and, in best Langford populist fashion, performed with musicians he found in the classifieds, it charts a course from pre-Colonial days to an imagined present where Columbus is detained by security and left to watch daytime TV, his mind reeling from the soulless progression of cartoons, game shows, and news-magazine exposés.  An astounding expository achievement, it should reassure anyone mistaking Gold Brick for a mere indictment of America: “We’ll turn the planes around today/And make them fly the other way/’Cos we know we’re all here to stay/And you know where you are/When you’re lost in America.”  Gold Brick examines a nation of proud individuals who may be a little worse for wear but who still believe in an American dream. It is Langford’s finest solo album to date and among the best work of his entire career.

Highlights: Lost in America, Gold Brick, All Roads Lead Back to Me, Invisible Man