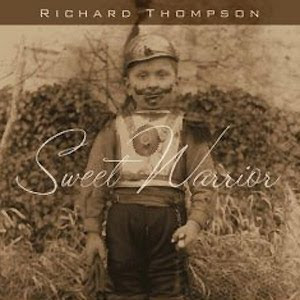 Richard Thompson is, it can be argued, a contender for greatest living guitarist.  His knack for avoiding the limelight and his unique playing style that abstains from typical guitar-god blues hokum means that your average Crossroads Festival attendee might not think so, but an examination of Thompson’s work reveals an astonishing breadth, color, and agility seen in few other masters of the instrument.  His first recorded work came as a member of English folk-rockers Fairport Convention, resulting in five studio albums from 1967 to his ’71 departure to pursue a solo career, and while the group continues to this day their most cherished material comes from the relatively brief Thompson era.  Prior to his ’72 solo debut Henry the Human Fly, Thompson also served as a session man for a variety of artists that included Nick Drake.  Following Fly, Thompson embarked on a joint career with one of that album’s backing vocalists, Linda Peters, who became his wife; they recorded six albums together before divorcing in ’82.  While operating in traditional folk and folk-rock milieu on his own albums, Thompson has collaborated with a wide array of artists, including David Thomas, frontman of visionary rock provocateurs Pere Ubu; experimental guitarists Henry Kaiser and Fred Frith; Captain Beefheart drummer John French; and, in perhaps his strongest guest appearances, with Anton Fier’s avant-rock project the Golden Palominos.  Thompson’s playing has figured heavily in a handful of films, most notably Werner Herzog’s Grizzly Man (’05).  Were Thompson merely a brilliant guitarist, his nearly two-dozen post-Fairport studio albums would be a shallower pool; his exceptional talent as a singer-songwriter makes his albums rare demonstrations of first-class instrumental and rhetorical prowess coming from a single source.

Thompson recorded three studio albums in the Aughts, alongside a wealth of live albums (mostly fan-club releases) and the Grizzly Man soundtrack.  Of the trio of studio efforts from the decade, Sweet Warrior (’07) is the last and finest, a return to electric work after the largely acoustic ’05 Front Parlour Ballads.  Having left the major label system after '99's strong Mock Tudor, Thompson made Warrior on his own dime and shopped it to indie labels after its completion.  A balance of pop tunes (Mr. Stupid, Needle and Thread, and the sax-driven jaunt Bad Monkey the best among them) and thoughtful ballads, the album embodies its title by examining the battles of romance.   Elsewhere, though, the warrior concept is addressed in regard to the futile sides of war and military life (the concepts are mingled in an inner-sleeve photo of a flummoxed Thompson in military uniform and camouflage facepaint, flanked by beautiful women kissing his cheeks).  Dad’s Gonna Kill Me refers not to fears of an angry father; the title instead invokes Baghdad and the fears of a deployed soldier in the face of unarmored Humvees, conservative home-front propaganda, and the specter of death.  Even better is Guns Are the Tongues, the album’s climax and one of Thompson’s strongest pieces of writing.  It is a ballad of a seducer and her line of soldier lovers, each of whom is enlisted to avenge her family’s history: “Guns are the tongues, Little Joe/The only words we know/The only sound that’ll reach their ears.”  For every agonizing ballad there is a pair of upbeat, ebullient bursts of rootsy pop, balancing the album between confounding matters of the heart and weary stories of battle.  If the album has a fault, it’s length—at 66 minutes, Sweet Warrior is a heavy listening commitment; yet, it is one with many rewards.  At age 57 and in his fourth decade of recording, Thompson made one of his best albums.

Highlights: Guns Are the Tongues, Take Care the Road You Choose, Johnny’s Far Away, Too Late to Come Fishing

Sublime bit: The end chorus of Guns Are the Tongues and his soaring vocal on the last plea of “Dry the old eyes of my mother, Little Joe” at 6:02.

Read the NOYOUCMON mission statement here.
Posted by noyoucmon at 1:44 AM