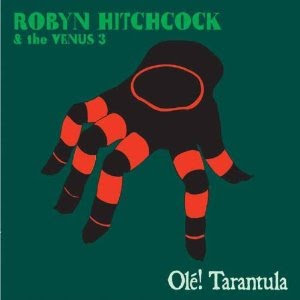 London-born songwriter Robyn Hitchcock has maintained a prolific solo career since leaving new-wave psych-poppers the Soft Boys in 1980.  Issuing some three dozen albums, half of those being studio efforts and the rest comprising outtakes, radio sessions, live gigs, and revisitings of old work, Hitchcock has developed a devoted following while consistently delivering engaging new material.  A certified English eccentric, Hitchcock built a reputation for unorthodox lyrics about vegetables, insects, and other such matter, though it is unfair to categorize him as a strict humorist or capable only of idiosyncratic composition.  His quick-witted, picturesque writing makes him a natural descendant of influences Bob Dylan and John Lennon, and he has a knack for fragile beauty as much as for spirited, assertive pop music.  While he began the Aughts with a dismissal from Warner Bros., leaving him without a major-label deal for the first time since the late Eighties, it would be his most prolific decade, producing six studio albums, another six of live material and/or outtakes, two comprehensive box sets of his ’80s solo work, as well as a Soft Boys reunion album, accompanying EP, and an exhaustive reissue of their ’80 LP Underwater Moonlight.

Hitchcock’s ’06 studio album Olé! Tarantula, his sixteenth not counting Soft Boys material, finds him recording with a dedicated group for the first time since the ’93 disbanding of his backing group the Egyptians.*  The Venus 3 features several well-known Seattle-based musicians: longtime collaborator Peter Buck on guitar, R.E.M. touring drummer Bill Rieflin (also late of numerous industrial groups including Ministry, KMFDM, and Pigface), and Scott McCaughey of the Young Fresh Fellows and the Minus 5 (the latter of which has also included Rieflin).  The album also features among its numerous guest spots contributions from former Soft Boys Kimberley Rew and Morris Windsor.  Most of Hitchcock’s previous Aughts work is reserved, acoustic music; stripped-down records like Luxor (’03) and Spooked (’04, his first on now-longtime label Yep Roc) are enjoyable, but are not among his most memorable efforts.  Olé! Tarantula is, conversely, his most electrified album since his work with the Egyptians.  It opens with two numbers that recall the finest of his ’80s pop heyday.  The hard-edged Adventure Rocket Ship juxtaposes a yearning lover with cosmic detritus like “skeletons of spacemen” and time-warp romance (“I kiss you in the past”); next is Underground Sun, a summery pop blast whose sound masks its lyric about a deceased friend (“You lie so lonely/Listening to the silence of the graves/You don’t belong there/You belong down south among the waves”).  A third pop blowout comes with ’Cause It’s Love (Saint Parallelogram), written with reclusive XTC frontman Andy Partridge yet unfortunately not boasting a guest appearance from its co-author.  Reprised from the Japan-only ’05 odds-and-ends LP Obliteration Pie is (A Man’s Gotta Know His Limitations) Briggs; despite a new arrangement with an incongruous synth line, the Tarantula version remains an album highlight.  The album’s closing song is its most haunting; N.Y. Doll is a moving account of the troubled last years of New York Dolls bassist Arthur Kane.  Olé! Tarantula is a contender for Hitchcock’s best work of the decade; those craving more should seek out its companion EP Sex, Food, Death...and Tarantulas, which features live versions of Briggs and five other tunes from Hitchcock’s deep catalog.

* Or fifteenth, to those who insist on categorizing his 2000 LP A Star for Bram as a mere set of outtakes from the '99 Jewels for Sophia album.  I maintain otherwise.

NOTE: As a proponent of wax, it pains me when I cannot recommend a vinyl pressing of an album; however, the vinyl pressings produced by Yep Roc are routinely substandard.  Overzealous bass response, muddy mastering, and general poor fidelity render this label's releases best purchased on the compact disc format.  I've heard both versions of Olé! Tarantula, and the CD trounces the vinyl version.  If you do not care about fidelity, purchase a download of this album.  The vinyl receives a NOYOUCMON "do not buy" warning.

Sublime bit: Underground Sun’s pulsing bridge (“One for the girl who went away/Two for the girl that went astray/Three is in between you”).

Read the NOYOUCMON mission statement here.
Posted by noyoucmon at 12:30 AM