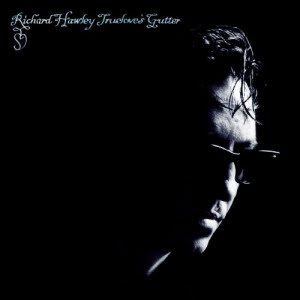 Sheffield songwriter Richard Hawley—former Longpigs guitarist and Pulp sideman—is one of those trusty musicians whose excellence comes from finding a suitable niche and treading that same ground over a span of albums, each of which has its strengths yet may seem interchageable to the casual listener.  His solo material focuses on sentimental lyrics set to lush, old-fashioned pop arrangements that suggest a common ground between Buddy Holly’s orchestral work; the early rock material on Sun Records of the Elvis, Scotty & Bill trio; and jazz-pop singers like Nat “King” Cole and Johnny Hartman.  After a mini-album and four full-lengths, including the Mercury Prize nominee Coles Corner (’06; see #84), Hawley adjusted his formula to produce his most masterful work of the decade.

The follow-up to Hawley’s poppiest album to date, Lady’s Bridge (’07), Truelove’s Gutter is a departure from the post-war dance-band crooner material that made helped to make his previous two albums so enjoyable.  Here, Hawley does not abandon his proven form so much as he dials it down and stretches it out; this results in some of the most intimate, quiet material of his catalog as well as its most epic numbers.  Hawley had done quiet material before—the bulk of ’02’s Late Night Final and the final third of Coles Corner focus on hushed, sparse compositions—yet on Truelove’s Gutter the calmness takes the form of meditations.  Expanding on Hawley’s usual beat-combo instrumentation, the songs are accented by a bevy of unusual, sometimes arcane devices: a singing saw, the cristal bachet, a glass harmonica, the waterphone, Tibetan singing bowls, the Ondes martenot (the sole electric instrument of that lot, an early keyboard producing theremin-like vibrations).  This non-traditional accompaniment lends a unique sonic undercurrent to the record; when the opening cut As the Dawn Breaks slowly builds from a swelling ambient hum, to name one instance, the organic instruments can easily be mistaken for modern electronics.  Many songs on the album have extended run times, the average going over six minutes.  Two pieces, Remorse Code and Don’t You Cry, are ten minutes long.  Remorse Code is the album’s centerpiece; a ruminative, opaque depiction of drug addiction, it caresses a single, gentle riff for its duration.  “The ship is wrecked/With all hands/Look to the reef/False lights from the land,” Hawley sings; the capsizing metaphor ends bluntly with a haunting chorus of “Those white lines/made your eyes wide.”  No mere indictment of another person’s follies, its lyric concludes with “I was likewise/In those white lines.”  Don’t Get Hung Up in Your Soul is the most desolate number, Hawley accompanied by an almost inaudible guitar and bass with the singing saw adding a far-off and lonesome tone.  The album’s general quietude emphasizes the power of its occasional crescendo: the blazing orchestral swell that erupts in the fourth minute of the otherwise quiet Soldier On, for example, is the album’s most stunning moment in part because it happens only once.  The songs of Truelove’s Gutter strip the bulk of filigrees from Hawley’s proven approach to pop songwriting, leaving its compositions laid bare.  Sometimes almost painfully frank yet thoroughly compelling precisely because of its intimacy, this fifth full-length album of Hawley’s is a striking achievement that will long resonate as a peak of his career.

Highlights: Remorse Code, Open Up Your Door, Soldier On, For Your Lover Give Some Time

Sublime bit: Those knowing refrains of Remorse Code and the mournful guitar solos surrounding them, especially the one from 5:34 to 7:33.

Read the NOYOUCMON mission statement here.
Posted by noyoucmon at 1:45 AM