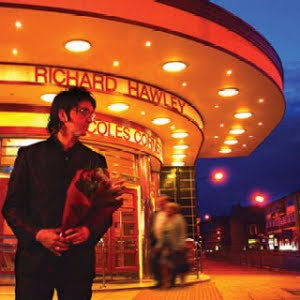 The son of working-class Sheffield musicians, Richard Hawley grew up playing guitar and toured with bar bands by age fourteen.  In the mid-’80s he played with Treebound Story, an indie-pop quartet reminiscent of Echo and the Bunnymen who recorded a handful of EPs and a Peel Session yet never managed to complete their debut LP.  The bulk of the group, including Hawley, then spent a stint as the Lovebirds; shortly thereafter, he joined local outfit Longpigs, with whom he had his first pronounced success outside of the region.  A relatively undistinguished Britpop group, they nonetheless earned significant commercial success in the UK before disbanding in ’99 after two albums.  Hawley’s next gig was as touring guitarist for fellow Sheffield mainstays Pulp.  Upon hearing some Hawley solo demos, Pulp singer Jarvis Cocker and bassist Steve Mackey encouraged him to pursue them further; the result was Hawley’s ’01 eponymous debut EP.  Hawley would go on to release five full-lengths in the Aughts.  After over fifteen years of dutiful guitar work in other people’s groups, it seemed unlikely that Hawley would make a convincing frontman; more unexpected, though, was Hawley’s knack for writing lush, romantic ballads informed as much by post-war British popular music as by early rock and roll and country-and-western troubadours and delivered in a resonant croon that recalls not just Elvis Presley but pop vocal giants like Nat “King” Cole and Frank Sinatra.  Hawley’s music is also reminiscent of Nick Lowe’s Aughts work (see #103 and #117); Hawley’s luxuriant approach, though, transcends the tight, minimal techniques of Lowe’s romantic soul music.

For Hawley’s fourth solo release, Coles Corner, he gained his first appreciable distribution deal, with Mute Records, after the dissolution of his previous label, Setanta.  Like most of his Aughts works, the album is named for a real location in his beloved Sheffield; in this case, for a famed meeting place for blind dates.  The songs depict courtships truncated, interrupted, and unrequited.  The title track opens the album majestically with a lavish introduction by a seven-piece string section.  “I’m going downtown where there’s music/I’m going where voices fill the air/Maybe there’s someone waiting for me,” sings Hawley.  This loneliness continues on tracks like I Sleep Alone and Tonight; in the latter, he sings “Maybe I should call her/Ah, but then she’ll know.”  Hotel Room finds a couple acting as surrogate lovers, its narrator singing, “It’s time I met someone like you.”  The album’s finest piece is The Ocean, its orchestral swell accompanied by a towering, impassioned Hawley vocal.  Much of the album recalls ’50s-era vocal crooners; Hawley’s love for early British rock shows through, though, including the light skiffle beat of Just Like the Rain and I Sleep Alone.  Hotel Room features a swoon-inducing Hawaiian lap steel solo.  The album closes with a murmured take on the traditional number Who’s Gonna Shoe Your Pretty Little Feet? and the late-night instrumental Last Orders, a piano piece that bleeds slowly into layers of ambient hum as if to wash away the pain of heartache.  The sentimental snapshots of Coles Corner make for Hawley’s first great record.

Sublime bit: The last 2:45 of The Ocean, beginning with Hawley’s final chorus that kicks in at 2:51.

Read the NOYOUCMON mission statement here.
Posted by noyoucmon at 1:44 AM