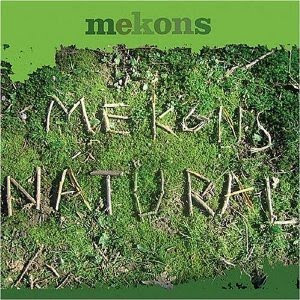 83. Natural, Mekons (Quarterstick, 2007)
For a time in the mid-Aughts, it was easy to think that the Mekons, veterans of the late-’70s Leeds punk scene, had fallen silent for good.  The majority of the band kept busy with other projects, and scattered across the globe (with a preponderance living in Chicago at one point or another) they had few chances to work as a cohesive unit.  The ’04 LP Punk Rock, comprising re-recordings of Mekons tunes from ’77-’81, seemed a self-issued eulogy.  Years passed with no full group live appearances.  There was no record-company turmoil keeping them from recording as in years past.  The arrival of Natural, then, was a relief to those in the cult of the group’s endearingly ramshackle live performances and literate yet pragmatically informal milieu.  The sassy militancy of their earliest work long gone, Aughts-model Mekons kept the rough-hewn melangé of guitar-bass-drums and violin-bouzouki-cümbüs harvested since their ’80s entrée to country and roots music while departing further from the rowdy energy of their ’90s work, nostalgic back-catalog visits notwithstanding.
Natural is, described lazily, an acoustic album; more accurately, though, it is a “natural” album.  The band’s ’00 effort Journey to the End of the Night (see #104) featured songs of apprehension and worry played very softly.  Natural is no mere wheedly-dee unplugged outing, and is often as worrisome in its subjects and more noisy in its execution as Journey.  Where that album’s dread spawned from the complicated vagaries of modern life, Natural is concerned with more earthy matters.  The Mekons tradition of peppering the inner sleeve with quotations, narratives, and historical trivia returns; while on Journey they pertained to tales of the grim urban underworld, Natural utilizes the likes of Charles Darwin, Scopes “Monkey” trial commentator H. L. Mencken, seventh-century astronomers, and geological talk and discussion of ancient stone formations.  The material world is generally met with suspicion; the Tom Greenhalgh-sung Zeroes and Ones, the album’s most aggressive track, describes ominously a world where reliance on technology leaves us “Strangers in nature/Aliens from god,” the alienating aspects of perpetual connectivity and accessibility leaving us “Lost forever, never lost.”  The sparse, hushed tune The Old Fox is a delicately pretty depiction of foxes walking over ice and searching for food in dustbins, their habitats bleeding into human society.  “Conditions are difficult/And full of responsibility,” we are told, as the voices of Greenhalgh, Jon Langford, and Sally Timms intertwine, trading gently overlapping vocal lines.  “It is good to collect things, but it is better to go on walks,” reads a quote from poet Anatole France; the Langford-sung Cockermouth embraces this spirit, its narrator rambling through the countryside.  “Jet fighters swooping loud and low/Rehearse for Armageddon,” but the protagonist gleefully sheds his clothes, conjures Thoreau, and gets lost on purpose.  “We used to dance/Around the stone head/It used to sing to us,” sings Langford in the haunting closing track Perfect Mirror, reprising a theme from the ’02 LP OOOH! (Out of Our Heads).  Natural knows that the temporal and the synthetic are forever mingled, the significance of antiquities such as stone heads permanently muted, but reminds us that it will always be beneficial to take walks and get lost.

Sublime bit: The impassioned plea, after ten largely muted and reserved songs, of the group vocal on “Planets swirl, bodies entwine/I can’t hear you, you’re cutting out” at 1:53 of the album’s penultimate track, Zeroes and Ones.