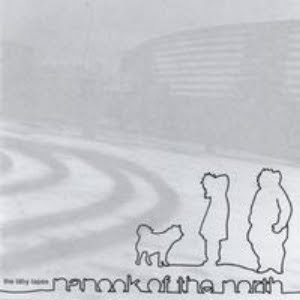 The thriving Swedish scene saw many of its indie-leaning acts make global headway during the decade, with Peter Bjorn and John, the Knife, the Soundtrack of Our Lives, and Jose Gonzalez among the most well-known.  Urbana, Illinois, distribution company Parasol was perhaps the Aughts’ key U.S. champion of Scandinavian pop music, and all of the acts mentioned above either got their first stateside releases on a Parasol label or their first American distribution from the company.  For every Parasol-related act that broke through, ten more didn’t; NOYOUCMON did not hear them all, but argues with confidence that the most charming may be a mysterious LP credited to Nanook of the North.

Originally issued by the Italian cassette-only label Best Kept Secret before its formal release by Parasol’s Hidden Agenda imprint, the album has a disingenuous backstory.  The Täby Tapes allegedly collects the tales of a young Inuit man traveling from Alaska to Täby, Sweden and his resultant culture shock and interpretation of matters of love and the ways that geography informs one’s psychology.  Many of the songs are duets in which “Nanook” (who receives the bulk of the vocal and instrumentation credits) is accompanied by a series of female vocalists depicting characters ranging from a dead poet, a dragon, and the town of Täby itself.  Nanook’s music is a sweet, gentle sort of electropop, augmented by acoustic instruments and nostalgic technology such as mellotron, stylophone, omnichord, and optigan.  There is no Nanook, of course; the project was helmed by Swedish musician/ engineer/ producer Mattias Olsson and his colleague and fellow studio wiz Olle Söderström.  Olsson previously played in a series of prog-rock bands including Änglagård, Pär Lindh Project, and White Willow before moving on to poppier horizons with acts like the female-led Pineforest Crunch (which also featured Söderström) and AK-Momo; his production discography is equally lengthy.

While The Täby Tapes is heavy on concept, its storyline is negligible.  The real story lies in the warm, plush electronic arrangements and lyrical dialogues between Olsson/Nanook and the many female guest vocalists.  Olsson’s knack for combining pop melodies with affecting beauty insures that many of the tunes possess a keen sublimeness; much of this also comes courtesy of Olsson’s duet partners.  The splendor is most apparent on the album’s first full track, Karin Boye’s Grave.  A platonically romantic conversation with the Swedish poet who killed herself in 1941, it juxtaposes youthful excitement with the departed’s longing for vitality.  Nanook fantasizes of Boye as his contemporary, giving life another chance and joining his band.  “We would have loved your style,” he sings; Boye, sung by Camela Leierth, has a simpler notion: “I would have loved to be alive.”  The quest for love is the album’s main theme.  Israel and Palestine - A Solution has a loaded title, but reveals less about world affairs than it does of the need for companionship.  St George and the Dragon uses beast-slaying as a metaphor for conquering heartbreak; in Hey Fragile, Nanook concludes “Living is easy, my ass/It’s a warzone.”  The occasional umbrage does not subdue the album’s overall optimism and dazzling winsomeness.  A second Nanook album was announced as early as ’04, but the decade ended without it. Olsson’s prodigious output with other acts and stewardship of his Roth-Händle Studio have kept him busy. One hopes another decade does not close without new material from this exceptional and lovely project.

Sublime bit: The album is filled with them, but the interplay between Nanook and Boye’s ghost is chillingly gorgeous.

Read the NOYOUCMON mission statement here.
Posted by noyoucmon at 1:46 AM