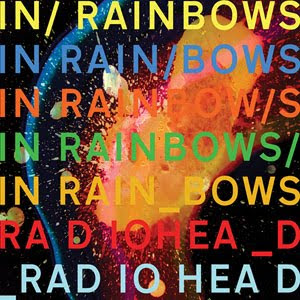 Just after the release of their fourth album Kid A in fall 2000, Radiohead appeared on Saturday Night Live playing new songs The National Anthem and Idiotheque.  A complicated, electronics-heavy performance also featuring live horns, for many viewers this was a jarring, exhilarating first glimpse of the band’s new sound.  As previous LP OK Computer (’97) had been hailed as an instant classic, anticipation for Kid A was high.  The abstrusely experimental record abandoned the guitar-based, melodic efforts of their first three LPs yet managed to debut at #1 in the U.S., possibly the most unconventional album to chart that high.  Kid A would come to be revered as a watershed, earning the top slot on numerous critics’ assessments of the Aughts.  As the band opened the decade in a bracing, confrontational way, so they ended it; self-released seventh LP In Rainbows subverted industry paradigms by appearing with nearly no advance notice, available for download directly from the band at the price of the buyer’s choice.  Offered as such for roughly two months, with many buyers opting to pay nothing, the record still hit #1 upon its physical U.S. release, selling millions of full-price copies and leaving the music industry in its wake.

Discussion of the album’s distribution model often overshadows that of its music, despite its quick ascent to the top of many critics’ ’07 year-end lists.  This aside, the album marks a creative renaissance for Radiohead.  The ’02 LP Amnesiac consisted of songs recorded at the same time as Kid A; not precisely an outtakes record, it is the group’s dreariest effort.  ’03 follow-up Hail to the Thief is an improvement, an occasionally aggressive and more emotionally articulate set of songs that lags due to its length.  In ’06, frontman Thom Yorke released his debut solo LP The Eraser, a primarily electronic effort.  Its sonic inspirations continue on In Rainbows, whose opening track 15 Steps begins with skittering electro-dubstep percussion before being joined by a fluid bassline and gently chorded guitar riff.  Weird Fishes/Arpeggi opens with a similar percussion figure, this time played live by Phil Selway; the drums propel the song through an insistent crescendo, ending abruptly for a verse before crashing in again.  The avoidance of typical verse-chorus-verse structure that began with Kid A continues here, the songs often progressing through distinctive movements without repetition.  The album is more soulful than most previous Radiohead efforts, often courtesy of Colin Greenwood’s bass.  On tunes like Jigsaw Falling Into Place and Bodysnatchers, they actually swing like a rock group.  Not all the tunes are groovy rockers, though; Faust Arp features an impressive string arrangement courtesy of the Millenia Ensemble, and All I Need boasts an orchestration based on piano and Selway’s cymbal washes.  In Rainbows bears repeated plays better than any Radiohead album of the decade. It would be a fool’s errand to quibble with the importance of Kid A, which conditioned millions of fans for experimental music’s rise in the mainstream during the Aughts.  In Rainbows, though, born in a happier time for the band than Kid A, is one of the finest albums in a now lengthy career that has seen many highlights.

Sublime bit: The hypnotic guitar picking described in the title of Weird Fishes/Arpeggi, along with that tune’s ethereal Yorke vocal.