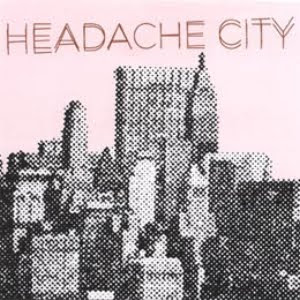 The modern-day independent garage rock scene can be a daunting one for casual fans to navigate.  Rarely covered by mainstream press--certainly not the likes of Rolling Stone, but also not given much time by Pitchfork and its peers--it lives in its own niche of specialists, enthusiasts, and fanatics; usually eschews record labels whose focus expands into other genres; often sticks to off-the-wall, low-budget venues for live gigs; and confuses the terminally unhip with a half-dozen genre descriptions that all point back to crude and fast punk with ’60s and ’70s sonic influences.  Band discographies are frequently limited to 7” singles, if the band in question got to record at all, and line-ups can bleed together until indistinguishable.  This is not a land occupied with much frequency by NOYOUCMON, but one band that rose above the din in the Aughts was Chicago’s Headache City.

Bassist Dave Head spent the mid-’90s as guitarist for influential Austin punk quintet the Motards; following their split and a brief stint with Texas outfit the Secret Lovers, he moved to Chicago and formed White+Outs (not to be confused with the White-Outs of Columbus, Ohio) with local guitarist Mike Fitzpatrick and fellow Austin transplant Arman Mabry.  They recorded one single in ’03 for fledgling Chicago label Shit Sandwich (name taken from This Is Spinal Tap; logo parodying that of iconic ’70s punk label Stiff) run by one Norah Utley, also known on the scene for fronting Airbrush, a comical punk mime troupe.  Later that year, Head and Fitzpatrick began a new project with Utley on keyboards and drummer Darcie Miller, releasing a three-song 7” in ’04 on Utley’s label and credited to Headache City.  The group went on to record a full-length LP, also for Utley’s imprint, in early ’06.  By the time of that eponymous debut, Miller relocated to Memphis and left the drum stool to be filled by novice Lisa Roe.  Headache City is a twenty-nine minute blast offering a more melodic, poppy stripe of punk than the ’04 single’s darker vibe and the brash ‘n’ snotty abrasion of garage rockers like Head’s old pals the Motards.  Fitzpatrick’s vocals are more tuneful than your average punk shouter, and Utley’s keyboard--typically set to “organ”--is the group’s secret weapon.  The lead track from the single, Kneejerk Reaction, is revisited in a less meaty but more hyper arrangement and with a new ascending vocal melody on the chorus that gives the rerecording an energetic edge.  The title track is a tough, tense rocker with obstinate organ punctuation and a rousing melodic resolution in its chorus.  A previously unrecorded White+Outs tune, Throw Up Red, is tackled, fitting nicely with the new group’s aesthetic.  The album’s final three tracks, beginning with Livin on the Edge of a Knife, end the album in a breathless whirlwind; final track Dont [sic] finds Fitzpatrick pleading, over a storming beat, “Don’t/ Don’t/ Don’t/ Don’t/ Do not go tonight/ I won’t/ I won’t/ Ever be all right,” as Head and Utley provide swooping, wordless backup vocals.  Headache City made two more singles and a second LP in the Aughts, all without Utley and with no replacement on keys; some of this material is a bit drab.  Fitzpatrick and Roe served concurrently in CoCoComa with Roe’s husband, Bill, recording two Aughts LPs.  Each of these is enjoyable, but the rough charms and melodic sensibilities of Headache City make it the essential piece of these bands’ Aughts discographies.  [By decade’s end Fitzpatrick had relocated to New York, leaving CoCoComa but still maintaining a Headache City Web profile.]

Sublime bit: Utley’s surprise vocal turn on the choruses of Suicide Summer; her breathy, stuttered croons of the title are the album’s cherry on top.