81. Mr. Alien Brain vs. the Skinwalkers 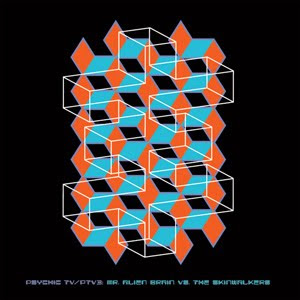 Singular British eccentric artist and musician Genesis P-Orridge, born Neil Megson in 1950, worked in confrontational performance and visual art from the late ’60s, forming notorious industrial-music pioneers Throbbing Gristle in ’76.  They dissolved in ’81 and P-Orridge formed the less scandalous but still uncompromising Psychic TV.  During some thirty studio albums and even more live LPs, P-Orridge, the only constant member, charted a musical course ranging from acid house, ambient, and pop-oriented psychedelic music.  Deciding to move more toward spoken word material, P-Orridge disbanded the group in ’99.  In the mid-Aughts he returned to both outfits, reforming Throbbing Gristle a year after the ’03 reactivation of Psychic TV.  Sometimes using the moniker PTV3, the band issued the Hell Is Invisible...Heaven Is Her/e album in June ’07.  PTV3’s lineup included Lady Jaye Breyer, P-Orridge’s partner with whom he famously underwent a series of plastic surgeries to more closely resemble one another. This relationship would inform the bulk of P-Orridge’s work in the Aughts.

While preparing for an '07 US tour, Breyer died of stomach cancer complications.  The mourning P-Orridge withdrew from work obligations.  It was with some surprise, then, when Mr. Alien Brain vs. the Skinwalkers, the second PTV3 LP, appeared just over a year later.  While its predecessor is a garish, bloated orgy of psychedelic indulgence, Mr. Alien Brain is a disciplined collection not free of levity yet profoundly focused in its grief.  That said, the apparent desire to create a new album as a memorial to Breyer that included her own contributions means that it is derived from a hodgepodge of sources: a handful of new studio cuts, a remix of a song from Hell Is Invisible (New York Story) and a Breyer poem to P-Orridge that appeared on that album’s vinyl version (I’m Making a Mirror), and five songs recorded live in the studio for an uncharacteristic hour-long Psychic TV feature on National Public Radio’s World Cafe program.  It is these NPR recordings that provide the album’s most astonishing material; they are impeccable performances largely lacking the usual rough edges of radio sessions, especially a gripping ten-minute straightforward rock ’n’ roll cover of the Velvet Underground’s Foggy Notion.  The most compelling piece, though, is a cover of Syd Barrett’s No Good Trying.  It begins with a 45-second loop of a disturbing sample from Barrett’s 1970 LP The Madcap Laughs finding him nervously failing to hit a note and asking to start the song again.  P-Orridge’s masterful repurposing of this uncomfortable moment sets a watchful tone for the album.  Original tunes Trussed, The Alien Brain, and Pickles and Jam further explore dark moods; along with Foggy Notion, a new performance of the poppy, joyous ’86 Psychic TV b-side Papal Breakdance and the closing I Love You, I Know--a playful Breyer/P-Orridge dialogue reminiscent of the ’69 Lennon/Ono Wedding Album--provide happy emotional relief.  The vinyl issue has a different track listing, omitting a song and adding an incongruous side of concert material and a Monks cover that already appeared on the ’06 Silver Monk Time tribute LP; the CD version is stronger. It is an intense, resolute album, sometimes peculiar in its choices, and perhaps the finest recording of P-Orridge’s lengthy and storied career.

Sublime bit: Foggy Notion’s rock ’n’ roll absolution, peaking at 6:38 after an extended bridge with a blissful “Whoooo!” as the band kicks back in.

Read the NOYOUCMON mission statement here.
Posted by noyoucmon at 2:23 AM