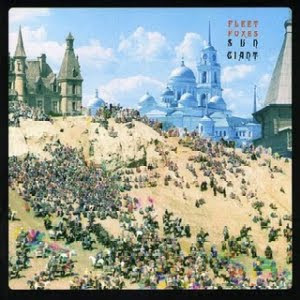 The acclaimed full-length debut by Seattle folk-rock quintet Fleet Foxes was preceded by the nineteen-minute Sun Giant EP.  Released digitally and as a tour souvenir in February ’08, the five-song work received an official physical U.S. release in April of that year just two months before the Fleet Foxes long player hit the shelves.  Appearing so close together, the two recordings came to be seen as companion pieces: Sub Pop’s vinyl edition of Fleet Foxes included a bonus 12” of Sun Giant; the overseas market received a two-disc “special edition” of the records (but using the full-length’s cover art); and Pitchfork named the conjoined works the best album of 2008 (though, it should be noted, the magazine originally reviewed them separately).  Even the band blurred the lines between Sun Giant and Fleet Foxes, as a single from Sun Giant (the EP’s highlight, Mykonos) was released nearly a year after the full-length was released.  All of this inter-record miscegenation makes sense, for both releases capture the young band at the beginning of a rise to critical acclaim unusual for a group at the time of its debut album.  The band toured to rapturous response--particularly in the UK--and earned rhapsodic reviews in the music press; in its July 2008 issue, UK magazine MOJO hailed the full-length as an “instant classic,” giving it five stars.  The album is an impressive achievement (see #95); song for song, though, taken on its own the Sun Giant EP is an even more distinguished release. The strengths of Sun Giant are attributable in part, perhaps, to its chronology. Though predating the album by a season on the release schedule, it was recorded a few months after the full-length.  It avoids, then, the introductory jitters and tentativeness sometimes natural for debut EPs; that was reserved for the group’s regionally released eponymous EP, sold on tour and in the Seattle area in late ’06 and long since discounted from the official Fleet Foxes discography.

Like the full-length, Sun Giant opens with an a capella piece.  While on Fleet Foxes the unadorned singing was just a fragment, the EP’s first song is almost composed almost entirely of unaccompanied vocal harmonies.  “What a life I lead in the summer/What a life I lead in the spring,” it begins, echoing the naïf wonderment demonstrated by the wide-eyed philosophical ruminations in the liner notes of the band’s ’08 releases.  Its 46-second coda of quietly finger-picked guitar and distant humming gives way to Drops in the River, a Sun Giant highlight that illustrates the band’s ability to create a booming, powerful sound without relying on volume or bombast.  The musical accompaniment low in the mix, including the drums whose parts seem reduced to floor toms and quietly crashing cymbals, the song’s brawn comes from the reverb-drenched harmonies that are the hallmark of the ’08-model Fleet Foxes.  The record’s centerpiece, Mykonos, possesses its boldest arrangement; Pecknold, his voice here husky and reminiscent of Bruce Springsteen, sings lead; only on the song’s extended coda do his bandmates join him on harmonies.  Nature is, as on the full-length, a lyrical theme; winter turns meadows brown, leaves are strewn on window frames, and snow covers treetops.  The aforementioned two-disc edition of this material appends one song to Sun Giant, the Mykonos b-side and traditional British ballad False Knight on the Road; it fits well stylistically with the group’s original material, but as the only cover in their catalog to date it does sit better in its first home as a flip side.  However the music is packaged, Sun Giant is a striking set of songs as worthy of consideration as its more famous full-length relative.

Sublime bit: The climax of Mykonos, from 2:25 to 3:23, starting with an understated drum fill before swelling with the EP’s strongest harmonies.

Read the NOYOUCMON mission statement here.
Posted by noyoucmon at 1:51 AM