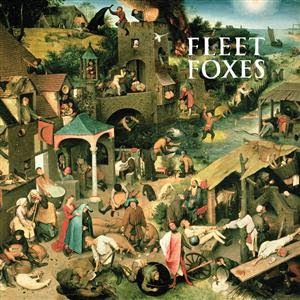 The Aughts saw your average musical bedroom putterer, emboldened by the Internet’s democratization of recording and distribution, switch from guitar to computer.  There’s nothing wrong with that; yet, wading through the resultant piles of DIY bleeps and bloops, it’s heartwarming to see people who grew up downloading music and still find resonance in creating it out of wood and steel. Seattle’s Fleet Foxes, led by Robin Pecknold, age 22 at the release of his band’s debut full-length, create a warm and lush acoustic-rooted sound emboldened by moving vocal harmonies.  The band’s work recalls numerous musical ancestors, most notably Crosby, Stills, and Nash, yet never lapses into nostalgia or reactionary posturing.  Their songs are gentle, yet possess a confidence and strength belying their years.

Pecknold and fellow guitarist Skyler Skjelset began playing together in high school, recording prolifically until the desire to incorporate additional instruments necessitated the addition of members.  They recorded an eponymous EP in ’06 to be sold at gigs until the small pressing ran out.  It is the anomaly of the group’s Aughts catalog, most of its arrangements bright and poppy; its execution a tad off-kilter, by decade’s end it pointedly remained officially unavailable.  Its final song, Icicle Tusk, foreshadows the music they would record for Sub Pop: its verses marked by a tempered acoustic guitar figure, a melancholy lilt in Pecknold’s lead vocal, and wrapped in the group vocal harmonies that would carry the band to fame.

The Fleet Foxes LP was preceded by their ’08 Sub Pop debut the Sun Giant EP, recorded after the full-length but issued as a stopgap as to have some more merchandise available on tour.  Both are more intimate and rustic than the ’06 demo.  The LP opens with an a capella fragment influenced by the Southern tradition of Sacred Harp music, a form of group singing with no leader whose concept is reflected in the album’s numerous songs on which Pecknold is not the sole vocalist.  The songs are drenched in reverb, lending the album a cavernous feel and a sense of timelessness.  Pecknold’s lyrics are full of mountains, forests, and the creatures therein, the protagonists often yearning for absent or detached loved ones.  Death is often closeby.  The subject of Your Protector is asked to “lay to die beside me, baby”; the narrator of Meadowlarks asks, “Hummingbird, just let me die/Inside the broken holes of your olive eyes.”  Most poignantly, Tiger Mountain Peasant Song asks, “Dear shadow alive and well, how can the body die?”  The nearly jaunty, almost round-robin White Winter Hymnal beautifully describes dripping blood as turning “the white snow red as strawberries in the summertime.”  While the lyrics are frequently morbid or foreboding, the music conjures promise and positivity; the arrangements resplendent with soaring, wordless vocals and exultant guitar lines.  This juxtaposition is seen best in Ragged Wood, which sounds like a cry of victory though its lyrics are about a lover who “Can barely remember you beside me/You should come back home.”  The band’s command of intimate, ageless music earned them much acclaim at an early stage, and Fleet Foxes is one of the most impressive debut albums of the decade.

Sublime bit: Those spiraling verses of White Winter Hymnal, and the way the wordless vocals kick in after “strawberries in the summertime.”

Read the NOYOUCMON mission statement here.
Posted by noyoucmon at 2:09 AM