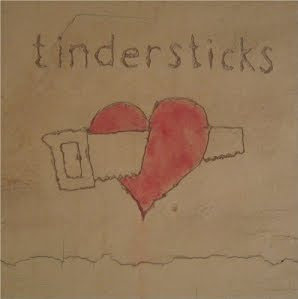 Nottingham group Asphalt Ribbons recorded four EPs from ’87-’91; their brisk pop jangle just missed the rise of Britpop.  After the band’s move to London, Ribbons leader Stuart Staples reformulated the musical approach, regrouping as Tindersticks.  The sextet debuted in ’92, releasing a handful of singles before delivering an eponymous first LP in autumn of the following year.  The new band’s specialty would be somber, introspective balladry led by the gentle baritone of Staples and accompanied by sumptuous arrangements of strings, brass, and woodwinds.  This iconoclastic stance of measured sophistication in a British era of flashy, frantic noisemaking earned them attention that their previous incarnation’s poppier approach was unable to do.  Three double albums in a row, each increasingly proficient yet demanding, led them to near exhaustion after ’97’s Curtains.  Refocusing again, now bringing soul music into their orchestrations, the group’s next three studio LPs would be shorter, more focused efforts.  By ’03, after six studio efforts and two soundtrack albums, the group once again found itself at loggerheads.  Staples released his first two solo works with no sign of new Tindersticks material, and the band appeared finished.  Invited to play a one-off gig at London’s Barbican in September ’06, the original Tindersticks lineup convened for the final time.  While Ribbons veteran Dickon Hinchliffe and two other Tindersticks founding members departed after that concert, Staples and organist David Boulter found a rejuvenated interest in working together under the old banner.  Beginning cautiously with the joint curation of children’s compilation Songs for the Young at Heart, the pair started work in January ’07, with longtime guitarist Neil Fraser, on what would be the seventh Tindersticks long player.

The Hungry Saw features sixteen musicians; their names, including the founding members’, are arranged alphabetically on the credit sheet as if to emphasize the new beginning; it is dedicated to “everyone at the Barbican on 17 September 2006,” confirming the original lineup’s final concert as crucial to the band’s next phase.  This first record by the refurbished Tindersticks is no dramatic departure from its predecessor Waiting for the Moon (’03); string arrangements once written by Hinchliffe are handled here by Lucy Wilkins and Calina de la Mare, and Terry Edwards contributes brass arrangements as he did on earlier works by the group.  The songs still focus on soulful, orchestrated balladry, interspersed with complementary instrumentals composed by Boulter.  While doubtfully intended as such, the lyrics can sometimes be imagined as commentary on the group’s resilient past: “And still we try/To reach for what has gone behind/But they’re here,” Staples sings in Yesterday’s Tomorrows. “Sometimes I wonder about the turns we took to get here,” Staples sings in the closing number, “but our song is carried on the wind.”  Enduring years of effort in various incarnations, with varying levels of acclaim and energy, Tindersticks closed the Aughts as unlikely survivors.  The Hungry Saw revealed the core trio of Staples, Boulter, and Fraser to possess a streamlined vitality despite those turns they took.  The group sounds more spirited here than it had in years, and it is more engaging than half of its predecessors.  A real case can be made that it is their finest album.

Highlights: Yesterday’s Tomorrows, The Hungry Saw, The Turns We Took, The Flicker of a Little Girl

Sublime bit: The climax of Boobar Come Back to Me, beginning when the backing vocals kick in at 2:08 and running through 3:08.

Read the NOYOUCMON mission statement here.
Posted by noyoucmon at 1:05 AM