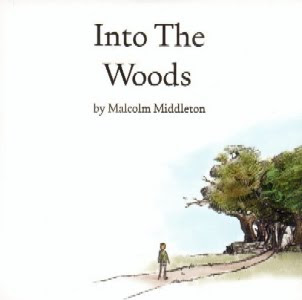 Malcolm Middleton toiled for ten years as half of Scottish duo Arab Strap, providing musical accompaniment for longtime pal Aidan Moffat’s bleary-eyed tales of romantic misery.  Over six studio LPs they earned a reputation as humor-filled but forlorn wretches, the tunes often half-paced and drifting with Moffat’s mumbled, nearly spoken vocals giving vulgar accounts of wasted nights and squandered relationships.  Following their fourth LP, both released solo albums.  Middleton’s 5:14 Fluoxytine Seagull Alcohol John Nicotine (’02) rivaled any previous Arab Strap work, revealing a keen songwriting wit yet lyrically rooted in oppressive self-hatred.  Its closing tune, Devil and the Angel, is a signpost for much of his starkly autobiographical solo material--the angel whispers encouragements; the devil tells him, “Malcolm, you’ll never be good at anything/And your songs are shite.”  Middleton reveals it was just a dream, shaking it off to then say that he agrees with the devil.  Arab Strap made two more albums before splitting, with their second solo records sandwiched between.  These final group works were their best, no doubt invigorated by the freedom the two found in their solo careers.

Just four months before Arab Strap’s final studio album, Middleton issued his sophomore LP Into the Woods; it is a striking progression from all of his previous work.  Joined by fellow Scots Barry Burns of Mogwai on piano, Delgados drummer Phil Savage, and Arab Strap collaborator Alan Barr on cello, Middleton produces a set of energetic, whip-smart tunes built on Arab Strap’s electro-folk customs and encompassing full-blown pop orchestrations.  While many songs mine the self-loathing territory of 5:14, they are mitigated by the dynamic arrangements; in moments such as the gently descending verses of Monday Night Nothing, lines like “I need to crash this piece of shit into a tree that fits” are even beautiful.  The album crashes open with the sparkling Break My Heart, a comical forecast of a relationship doomed to either fail--or succeed, but ruin his career.  No Modest Bear incorporates heavy techno-dance beats alongside an uncharacteristically positive lyric to a lover (“No more despair/No more being scared”).  The album’s highlight is Loneliness Shines, its driving choruses filled with swirling walls of electric guitar recalling My Bloody Valentine’s most frenzied shoegazing attacks.  Middleton is a world-class miserablist: he resents seasons (Autumn is a “fucking cunt”), he gets stabbed on Christmas (Burst Noel), and he apologizes for his face (Bear With Me and A Happy Medium).  In A New Heart he sings “I’ve been asked to write a song without a swear word or a slight/At myself or another,” later noting “I almost got accosted by the good old negative.”  His next three Aughts solo albums tempered these indulgences a bit; still, none comes close to the strengths of Into the Woods.  A remarkable confluence of instrumentation and Middleton’s drollery, it bests his former group’s entire catalog and serves as the finest introduction to his prolific solo career.

Sublime bit: Those walls of guitar squall that explode with every chorus of Loneliness Shines.

Read the NOYOUCMON mission statement here.
Posted by noyoucmon at 1:15 AM