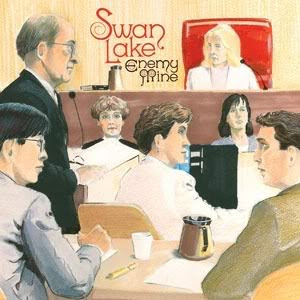 There is a temptation to call any meeting of individually accomplished musicians a supergroup.  If this is accepted, Swan Lake surely qualifies, if on a smaller scale than, say, Emerson Lake & Palmer.  What Swan Lake shares with the likes of ELP is a love for prog rock--not twenty-minute organ solos, but lapses from typical song structure and a penchant for fantastical, thespian lyricism.  The members come from a clutch of Canadian groups known as wordy, prog-leaning dramatists: Spencer Krug, frontman of Montreal’s Sunset Rubdown and co-leader of Wolf Parade; Carey Mercer, singer/guitarist for Victoria outfit Frog Eyes; and Vancouverite Dan Bejar, occasional lyricist and vocalist for the New Pornographers but most accomplished as the chief of Destroyer.  All have unusual voices.  Krug and Mercer are sometimes hard to distinguish, but Mercer’s voice is the more frantic stripe of tremulous melodrama.  Bejar’s voice is high and reedy.  In Swan Lake, they all take turns singing lead. They have relatively similar writing styles, and before their ’06 debut LP Beast Moans had worked together in various capacities.  Krug served on-and-off in Mercer’s Frog Eyes, and Bejar made an ’05 EP credited to Destroyer but using a Krug-less Frog Eyes as its backing band.  All of this cross-pollination makes collaboration obvious, and Swan Lake retains the feels of its members’ groups while shaping its own sonic identity.  It most closely resembles the swirling, avant-pop theatre of Sunset Rubdown, but is even more arcane and gothic (not goth); Bejar, the strongest lyricist, has in Swan Lake a more oblique template than usually afforded him in his other work, and Mercer’s twitchy, clamorous Frog Eyes outbursts are tempered by Swan Lake’s more deliberate pace.

But what of Enemy Mine, their second LP?  More focused and engaging than Beast Moans, it emphasizes the side project’s long-term viability.  Opening tune Spanish Gold, 2044 builds from a ragtag arrangement like a faltering New Orleans funeral procession into an ostentatious production finding Mercer name-checking Palinurus, Julliard, and Leonard Cohen’s Bird on a Wire before bellowing, “I left this bullwhip/On the nightstand” to Bejar’s wordless, gliding backing vocals.  This is heavy theatre.  One senses an aura of camp, particularly on Mercer’s tunes (the nutty cover art of a courtroom sketch is another giveaway to this triad’s strange humor).  Krug’s Settle on Your Skin is a hyper piano blast and the LP’s most upbeat number.  His second contribution here, Paper Lace, would appear three months later on Sunset Rubdown’s Dragonslayer LP, continuing a Swan Lake habit of blurring the boundaries between the side project and the primary group (Beast Moans included a tune that would reappear, dramatically rearranged, on Destroyer’s Trouble in Dreams LP; the Krug-penned Paper Lace also features the character Jackie, a name that haunts many Bejar compositions).  The album’s most stunning moment comes in Bejar’s Heartswarm.  It opens with a gently strummed acoustic guitar, a heavily reverbed but gentle drum cadence, and a delicate piano figure; Bejar then sings, “Do my eyes deceive me/Or is it truly springtime in Paris for that piece of shit?”  Bejar has a knack for injecting profanity into lyrics without gratuity, and this is about the finest example.  A willfully pretentious lark combining the quirks of three difficult, arty groups, Swan Lake is not for everybody.  Fans of its members’ other bands require these records, though, and at the Aughts’ end the best entry point for Swan Lake remained the perverse delights of Enemy Mine.

Sublime bit: That first line of Heartswarm and its jarring, hilarious juxtaposition of the coarse with the lovely.