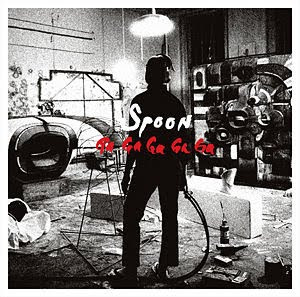 Spoon’s sixth long player and final Aughts album, the daftly titled Ga Ga Ga Ga Ga, finds the Austin group’s music sharpened and streamlined.  Half fidgety, tight pop songs and half breezy white-boy soul, the record was Spoon’s most concise and economical record to date.  While the junior executive indie rockers’ Aughts catalog consists of four smartly appointed LPs of increasing achievement, these can appear interchangeable to the casual listener; while earlier efforts like the ’01 Girls Can Tell, for example, is built on the same blueprint of taut yet groovy guitar-based backing and Britt Daniel’s obliquely clever lyricism reminiscent of an art-school Elvis Costello, Ga Ga Ga Ga Ga is more focused, entertaining, and memorable.  As I’ve noted elsewhere (see #108), the Spoon LP you favor may come down to drawing straws; should you decide on this effort, though, the rewards may last longer.

With the group’s lineup in flux at ’05’s Gimme Fiction after the departure of longtime bassist Josh Zarbo and much of that record recorded by Daniel and drummer Jim Eno, Spoon’s Ga lineup is stabilized as a quartet, including bassist Rob Pope of then-dissolved emo veterans the Get Up Kids.  Horn and string guest spots spice up a handful of tunes.  At just over 36 minutes, Ga is about as long as any Spoon album but unlike some of the others it is the kind of record that zips by, begging for another play.  This is in despite of the peculiar placement of The Ghost of You Lingers as the album’s second track; founded on a pounding, one-note piano riff that dominates the song’s three-and-a-half minutes (and whose phonetic approximation provides the album’s title) and with little other sonic meat on its bones apart from a handful of competing, disembodied vocal fragments, the song is long and jarring enough to make listeners with short attention spans turn off the record.  Should the casual listener persevere, the album’s truest reward comes at the third track with a shift to crisp pop mode, continuing at a pithy clip for its remainder.

The band is literate enough to feature a 1963 photo of American sculptor Lee Bontecou on the album cover but classy enough to avoid referential pop-culture overkill in its songs, and much of Daniel’s wordplay on Ga is more abstruse than ever.  Only The Underdog and Finer Feelings offer explicitly linear narratives, the latter an account of a hapless chap from Memphis seeking salvation in the help-wanted or dating sections of the local paper, whichever comes first.  Don’t Make Me a Target, with its “Nuclear dicks with their dialect drawls/That come from a parking lot town,” evokes the slightest whiff of politics.  As important as the album’s lyrics, though, are its arrangements.  Split between the jaunty yet tough-edged pep of tunes like The Underdog (built sunnily on invigorating acoustic guitar, a soft horn arrangement, and handclaps) and the slinky groove of Eddie’s Raga and Don’t You Evah (a cover of a theretofore unreleased song by NYC trio The Natural History), the record is paced brilliantly, at least after the confounding gambit of its second track.  Ga Ga Ga Ga Ga is strong while remaining freshly loose and, despite the mix-and-match tenor of Spoon’s catalog, it is as spirited as they'd yet gotten and it makes a respectable choice for the finest record they’d recorded thus far.

Highlights: You Got Yr. Cherry Bomb, Don’t You Evah, Finer Feelings, The Underdog

Sublime bit: How each chorus overlaps with the first line of the next verse in Eddie’s Raga, one of a handful of great uses of vocal overdubs.

Read the NOYOUCMON mission statement here.
Posted by noyoucmon at 1:27 AM