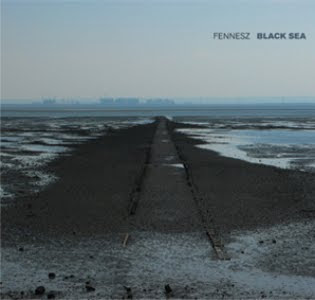 Austrian guitarist and laptop composer Christian Fennesz was the Aughts’ leading practitioner of ambient and electro-acoustic improvisation, releasing three primary albums during the decade* and a dozen more records in collaboration with other artists ranging from electronic mainstay and Yellow Magic Orchestra keyboardist Ryuichi Sakamoto to alt-rock songwriter/guitarist Mark Linkous of Sparklehorse.  Fennesz’s solo material, beginning with ’95 debut EP Instrument, consists of challenging instrumental pieces combining melodic structures with drones, static, and glitch techniques that rely on choppy, discordant noises approximating the sounds of damaged equipment, short circuits, and other aberrations (the song Before I Leave on his ’01 LP Endless Summer, for example, sounds almost entirely like a skipping compact disc).  In ’99 he released the two-song single Fennesz Plays featuring his interpretations of the Rolling Stones’ Paint It Black and the Beach Boys’ Don’t Talk (Put Your Head on My Shoulder), the purported cover versions so unrecognizable that royalty-controlling agents allegedly determined the original artists’ writing credits to be unnecessary.  Other artists use these compositional methods in abrasive, confrontational manners, such as the jagged, grating eruptions of UK duo Autechre whose seemingly impenetrable glitch opus Quaristice was released the same year as Fennesz’s fourth solo album Black Sea.  Fennesz utilizes them in more understated ways, often as an accompaniment to his effects-laden guitar or as one element in a set of layered sonic accents.  This is music devoid of rhythm, melodic only occasionally and in the sparsest sense.  From his first full-length, the ’97 Hotel Paral.lel [sic], to Black Sea, his final album of the Aughts, his music grew progressively nuanced and calm.

The music of Black Sea is as desolate as the winter vista on its cover.  The first two minutes of the ten-minute opening title track contain the album’s harshest sounds; a squall of static and industrial clamor brings to mind the noise of a shipyard before giving way to a gentle acoustic guitar pattern at the three-minute mark.  Slowly, the guitar is met by an undercurrent of gurgling static suggesting the rolling waves of the sea.  Two of the album’s finest pieces feature guests: The Colour of Three, with pianist Anthony Pateras, features walls of Fennesz’s treated electric guitar, forming abruptly like an electric charge before dissipating slowly over a bed of Pateras’s prepared piano that sounds like deep bells pealing in slow motion.  The album’s centerpiece, Glide, features labelmate Rosy Parlane, with whom Fennesz released a joint single in 2000; recorded live, the nine-minute piece opens with a sound like distant wind blowing; echoing, erratic percussive accents create tension before the first hints of melodic progression begin near the piece’s fourth minute, taking six minutes to build to a crescendo before fading glacially to silence.  Black Sea, like all good ambient music, rewards its patient listeners with immense beauty, and its author is the premier ambient musician of the decade.

NOTE: The vinyl version, which has different cover art, omits The Colour of Three and another tune, Vacuum; as such, it is not recommended.

* His second solo album, Plus Forty Seven Degrees 56' 37" Minus Sixteen Degrees 51' 08", is often said to be a 2000 release; however, its original release, in a limited-edition slipcover, came in 1999, with the 2000 issue being its second pressing in a regular jewel case.

Sublime bit: At 5:50 of Glide a single, high-pitched tone rings out; it is subtle, but marks the piece’s climax and the beginning of its fade to silence.

Read the NOYOUCMON mission statement here.
Posted by noyoucmon at 1:47 AM