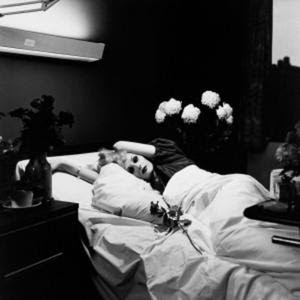 Antony Hegarty, an England-born, longtime US resident, toiled for years in the experimental theatres and cabarets of New York City before an arts grant in ’96 enabled him to record professionally with other musicians.  Hegarty named his nascent group after late transgender activist Marsha P. Johnson, and constructed a sparse, piano-based sound featuring his theatrical, almost operatic singing voice.  Their increasingly frequent late-Nineties live gigs got the attention of experimental artist-musician David Tibet, who had worked with Psychic TV and Nurse With Wound while leading his own group, Current 93, and operating the small UK label Durtro.  Tibet offered Hegarty an album release, resulting in an eponymous ’98 LP.  Hegarty’s talent arrived fully formed on Antony and the Johnsons, no surprise after eight years of live performance.  A relatively straightforward set of piano ballads whose lyrics address difficult topics from romantic catharsis to psychosexuality, it is good in its own right but the least compelling of his three studio albums to date.  It would be seven years before his next album; the group’s only new releases until then were the ’00 three-song Durtro EP I Fell in Love With a Dead Boy, two-thirds of which consisted of covers, and two minor split releases with Tibet’s Current 93 (half of a live EP and one studio outtake on a 7”).  While Hegarty lacked in prolificacy, his connections in the NYC art world secured him numerous collaborations and film appearances; most notably, he sang lead vocals for two songs on Lou Reed’s ’04 live LP Animal Serenade. These guest spots were no preparation for the creative leap of his next studio album.

I Am a Bird Now is a stark, soulful set of songs addressing gender identity, dysphoria, and psychic ascension from traditional concepts of sexual classification.  Twenty musicians and vocalists are credited, almost twice as on his debut LP, and only drummer Todd Cohen is retained.  The accompaniment includes strings and horns, used judiciously with minimal arrangements reminiscent of a chamber ensemble.  While Hegarty’s voice is the focal point, several other singers appear; Lou Reed contributes a spoken introduction to Fistful of Love, Devendra Banhart sings a brief aria on Spiralling, and Rufus Wainwright sings an entire song, the excellent What Can I Do?  The finest guest vocal comes when Hegarty duets with Boy George on the emotional You Are My Sister; the performance illustrates the power of George’s voice, a reminder that his Aughts activity transcended his tabloid-level mayhem.  “Hope there’s someone who’ll take care of me/When I die, when I go,” Hegarty sings on the opening cut, presaging the ruminations on death and transition he would examine closely on his next album, The Crying Light (’09; see #93); death is a theme on Bird as well, though here it is often followed by a second birth—that of the soul and sexual spirit. This is most pronounced in For Today I Am a Boy and, in the triumphant album closer, Bird Gehrl: “I’m gonna be born/Into, soon, the sky/’Cause I’m a bird girl/And the bird girls go to heaven/I’m a bird girl/And the bird girls can fly.”  Hegarty’s compositions on I Am a Bird Now speak to the ecstatic truths of individual identity, with a command seen in few other singers of the time.  His creative growth in the seven years since his first album represents one of the most startling progressions in Aughts pop music.  Bird controversially won the UK Mercury Prize (not for subject matter, but for disputes over Hegarty's residency; the prize is intended for British recordings), and remains NOYOUCMON’s pick for best album of 2005.

Highlights: Bird Gerhl, Fistful of Love, You Are My Sister, Hope There’s Someone

Sublime bit: One comes along about every three minutes on this album, but the sheer emotion of his vocal on Bird Gehrl encapsulates them all.