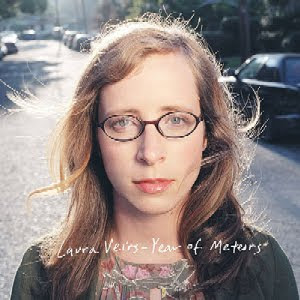 Colorado-born Laura Veirs, a self-confessed latecomer even to listening to music, fooled around in a college punk band before turning to songwriting as a distraction during an unhappy geology expedition to China.  This composition foray resulted in a pair of self-released albums, beginning with a ’99 eponymous LP after a relocation to Seattle.  Veirs’s music is rooted in folk stylings, with the occasional western twang; her coarse first record features just vocals and acoustic guitar.  Her singing voice has an unvarnished quality much like the naïf sing-speak of Liz Phair’s early work yet with the timbre of Suzanne Vega.  Also like Vega, who grew from straight folk to the complex electronic tapestry of the ’92 LP 99.9F°, Veirs expanded her sonic palette over successive albums.  The instrumentation is augmented with each outing, first with double-tracked vocals, banjo, and mild effects; for ’03 third album Troubled by the Fire, a full band is added, with electric guitar, horns and woodwinds, keys, and strings; eventually, electronics would become a prominent part of her sound.  Veirs’s early work earned considerable attention, resulting in a guest spot on three Troubled tunes by veteran guitarist and composer Bill Frisell, who also grew up in Colorado.  By her fourth LP, Veirs would have a major contract, becoming label mates with Frisell on the Warner-distributed Nonesuch Records.  Carbon Glacier (’04), her first Nonesuch effort, is sparse and ghostly, its aura matching the dark, wintry landscape of the etchings on its jacket.  The folk tunes therein are accented with spectral, minimal electronics.  The backing band, dubbed the Tortured Souls and featuring drummer, accomplished producer, and future Veirs husband Tucker Martine, would serve on the remainder of Veirs’s Aughts catalog.

Fifth album Year of Meteors is populated by confident, hard-edged pop arrangements, a departure from Veirs’s previous folk-heavy releases.  Opening cut Fire Snakes begins with a gentle acoustic guitar pattern, Veirs eventually joined by simmering electro percussion, atmospheric guitar overdubs, and reverb-laden viola, creating an understated, glimmering vibe.  Galaxies features a downbeat rock arrangement with a playful, oscillating synth line running throughout.  Secret Someones is the most brisk number, its verses and choruses propelled by an insistent drumbeat and pulsing, double-tracked Veirs backing lines accompanying her main vocal.  Like the ’06 Sonic Youth song Or (see #74), it climaxes with an excitable music fan’s series of questions: “Tell me/Did you make it to the show?/Tell me/What did you make of the drummer’s hair?/Tell me/About the atmosphere/Tell me/About the faces that greeted you there.”  Parisian Dream is carried by a powerful drumbeat and vibrant viola figure; like the more delicate Spelunking, it uses a lighted lamp as a metaphor for a lover’s warmth.  Though Veirs’s arrangements have become more complex, the album has its share of acoustic ballads; the finest, and the album’s most entrancing song, is Where Gravity Is Dead.  To a stark accompaniment, Veirs sings of a willfully isolated figure who perplexes the narrator: “Don’t you wish for someone/To pull you on a string/Down from atmospheres/Down into a clearing/To kiss and box your ears?”  Saltbreakers (’07), her next and final Aughts album, lacks the allure of her other two Nonesuch releases; Year of Meteors, though, is an often enchanting career highlight and captivating expansion of Veirs’s sound.

NOTE: I prefer the CD version over the vinyl version issued by Kill Rock Stars, as the latter includes a different version of Galaxies that features a guest verse by Seattle rapper Specs One (the pseudonym-happy gent doing business here as "Kotos the Rock Thrower"), which Nonesuch declined to include on their version.  I hate to side with a major label when it comes to an artist's vision, but even the mellow groove laid down by Specs One—whose flow is, frankly, not the smoothest—is too much of an obtrusion for me when it comes to Laura Veirs music.  Take your pick of formats, but know what you're getting.

Sublime bit: Those pulsating choruses of Secret Someones and Veirs’s murmured backing chant of “Hey/Hey/Hey/Hey” throughout the bridge.

Read the NOYOUCMON mission statement here.
Posted by noyoucmon at 2:12 AM