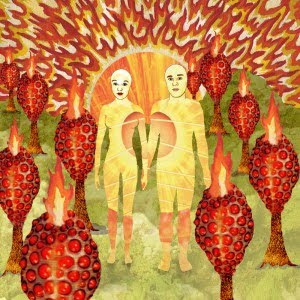 The arrival of The Sunlandic Twins marked the seventh full-length album attributed to Of Montreal.  Kevin Barnes, the Athens, Georgia, group’s sole constant, recorded the first five albums with a revolving cast of three to six members; as part of the Elephant Six community—a collective of like-minded Athens musicians and artists—the various lineups shared members with groups like Neutral Milk Hotel, Elf Power, and Marshmallow Coast.  A common thread of the Elephant Six music is the influence of ’60s psychedelic pop, revealing itself to varying degrees on the various bands’ records yet becoming a prominent touchstone for Barnes’s work in the first half of the Aughts.  His earliest material, such as Of Montreal’s ’97 debut LP Cherry Peel, is largely acoustic, nearly lo-fi, and dominated by playful, almost juvenile examinations of relationships.  The early Of Montreal years showed Barnes prolific almost to his own detriment and in sore need of an editor; with a weakness for intricate conceptual projects (though, like many such works, often with impenetrable story lines) and twee, fanciful arrangements sometimes missing musical conventions such as choruses, albums like the nearly tuneless The Bedside Drama: A Petite Tragedy (’98) and the 70-minute Coquelicot Asleep in the Poppies: A Variety of Whimsical Verse (’01) can make for extremely trying listens.  Following the ’03 dissolution of the group’s primary label, Kindercore (Of Montreal never recorded on the Elephant Six label itself), and the departure of two band members, Barnes downsized the project and recorded the sixth album, Satanic Panic in the Attic (’04), almost entirely by himself.  Proving that sometimes less is more, it was the best Of Montreal album to date, a full realization of the swirling world of technicolour pop-sike he’d tried for with Coquelicot; this time, though, the whimsy was controlled, the sprawl largely mitigated, and—most importantly—the songs were full of hooks.

The Sunlandic Twins, issued almost exactly a year after Satanic Panic, repeated the formula of nearly solo, hook-laden pop music; it is reminiscent of ’60s-era lysergic sonic adventurists like many populating the Nuggets and Rubble compilations of period music, as well as the natural progression of early-’90s psych revivalists like Jeff Saltzman’s Cerebral Corps.  While Satanic Panic sometimes feels claustrophobic, as if trying to include too many musical ideas in some of the songs, The Sunlandic Twins is a balanced set of compositions whose inventiveness and impeccable execution show Barnes to possess a knack for studio wizardry suggestive of the indie-pop version of Todd Rundgren or Prince (not to mention incorporating stylistic qualities that would fit nicely on songs by either of those artists).  Several songs incorporate multiple movements, creating miniature pop symphonies (an approach Barnes would exploit to an extreme degree on the ’08 Skeletal Lamping).  The album contains some of Barnes’s most personal lyrics to date.  Oslo in the Summertime, about Barnes’s temporary relocation to Norway, mentions his wife by name; So Begins Our Alabee, a love song to their baby daughter, reveals his worry that “I never want to be/Your little friend the abject failure.”  The album came with a four-song bonus EP—another testament to Barnes’s restless prolificacy—but it’s the LP proper that dazzles.  There would be two more Of Montreal LPs in the Aughts, alongside a seemingly endless line of singles, EPs, and compilations; The Sunlandic Twins is near the top of the heap.

Highlights: Forecast Fascist Future, So Begins Our Alabee, The Party’s Crashing Us Now, I Was Never Young

Sublime bit: Barnes’s voice rising to a jubilant howl on the final line of “May we always/Stay/Stay/Gentle,” 3:36-3:48 of Forecast Fascist Future.

Read the NOYOUCMON mission statement here.
Posted by noyoucmon at 12:27 AM