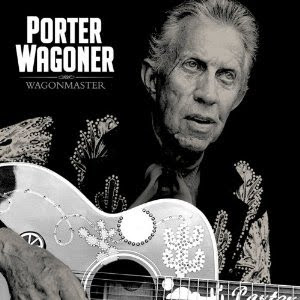 Missouri-born Porter Wagoner never quite captured the zeitgeist that allowed some of his contemporaries to resonate outside country and western circles.  An inveterate traditionalist, Wagoner made some mainstream inroads with his long-running TV program The Porter Wagoner Show (’60-’81), its middle years featuring regular cast member and duet partner Dolly Parton.  With his gaudy Nudie suits, bountiful pompadour, and taste for cornpone humor, Wagoner cut a figure that on first blush might seem best relegated to the cast of Hee Haw.  A closer look at his career, though, reveals a firm command of serious material.  Matched only by Cash, Wagoner recorded the earliest country concept albums; efforts like Confessions of a Broken Man (’66) and The Soul of a Convict (’67) go beyond well-worn country tropes of hard luck and show a keen insight on topics like depression and mental illness.  Issuing 81 charting singles since going solo in 1952 after leaving his local group the Blue Ridge Boys, Wagoner well earned his position as ambassador and unofficial host of the Grand Ole Opry.

Like far too many country legends, Wagoner endured a dry spell in the ’80s.  His 35-year deal with RCA ended and he did one-offs for a handful of labels until calling it quits in ’86.  He continued to perform; it wasn’t until 2000, though, that he released another album, the outdated-sounding The Best I’ve Ever Been.  Aside from the fortuitous ’02 Unplugged, his Aughts recordings were then limited to poorly curated gospel compilations in the ghastly tourist-country ghetto of labels like TeeVee.  In ’07, the luck previously afforded a handful of his contemporaries (see #119 and #121) was visited upon Wagoner when a proper, well-equipped record company plucked him from recording obscurity at age 79.  While those artists’ comeback efforts incorporated modern pop covers, rafts of indie-rock guests, or adoring though counterintuitive curators, Wagonmaster presents the artist undistilled and in his own milieu.  Produced by Marty Stuart, himself a country veteran, the album is backed by Stuart’s excellent band and the production is crisp and tasteful.  Like many aged country singers, Wagoner emphasizes material from earlier in his career; a whopping five songs are new recordings of material from his ’71 LP Porter Wagoner Sings His Own.  The pacing is reminiscent of a variety show, with a Stuart-sung hoedown theme opening and closing the record and a similar intermission at midpoint (in which Wagoner joyfully exclaims, “Everybody have a good time, son!”).  The album’s first full song, Be a Little Quieter, is its most celebratory in execution despite its lyrical wish that a departed lover’s memory wouldn’t echo through the narrator’s hallways each night.  Two other early-’70s pieces examine hard life through sunny arrangements: Albert Erving depicts a lifelong bachelor who cherishes a wood carving of an imagined lover, and My Many Hurried Southern Trips, a Parton co-write, is sung by a bus driver who shuttles all manner of troubled souls.  Hotwired, a cover of an ’06 country-rock tune by Arkansas singer Shawn Camp, is a bit of a misfire, yet Wagoner’s delivery is charming.  Wagonmaster’s most famous tune is Committed to Parkview, a Cash composition about a mental hospital in which both men spent time.  Wagoner’s opening recitation ends with “I hope I never have to go there again,” his voice bearing no trace of storytelling gimmickry.  A shining accomplishment after twenty years in record-company wilderness, Wagonmaster stands among the best country albums of the Aughts; sadly, it was Wagoner’s final album, as he succumbed to cancer just four months after its release.

Highlights: Be a Little Quieter, My Many Hurried Southern Trips, Fool Like Me, Brother Harold Dee

Sublime bit: The chiming group vocals that come midway through each verse of Be a Little Quieter are sheer spine-tingling country gold.

Read the NOYOUCMON mission statement here.
Posted by noyoucmon at 1:43 AM