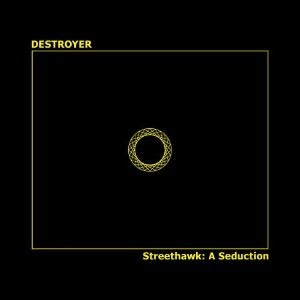 Much transpired between Vancouver singer/songwriter Dan Bejar’s ’95 demo tape submission to the Canadian Broadcasting Company’s experimental Brave New Waves radio show under the nom de plume Destroyer and the 2001 release of his fifth full-length collection, Streethawk: A Seduction.  Bejar began with his earliest work to formulate the literary approach that would make him one of the decade’s most celebrated indie songwriters, yet efforts like We’ll Build Them a Golden Bridge (’96) and the cassette-only Ideas for Songs (’97) are middling juvenalia—fittingly issued on a vanity imprint dubbed Tinker—whose songs often sound less like compositions than the unplanned byproducts of learning how to use recording equipment.  After City of Daughters (’98), his first release to benefit from the help of other musicians, a professional studio, obviously deliberate craftsmanship throughout, and a modicum of distribution, Bejar branched out, collaborating with two other groups.  In 2000, he released albums with ex-Kreviss singer Sara Lapsley’s ebullient pop outfit Vancouver Nights (as guitarist) and ex-Zumpano frontman Carl Newman’s new group the New Pornographers (as songwriter and occasional lead vocalist).  These efforts redoubled the strength of Bejar’s primary project; while City of Daughters is a dramatic improvement over previous Destroyer works, it still contains a fair amount of tentative writing and has as many brief musical sketches as full-fledged songs.  Its follow-up, Thief, released the same autumn as the long-gestating New Pornographers’ debut, is a confident stride forward and the first exceptional Destroyer record.

As much of an improvement as Thief was, its ’01 follow-up Streethawk: A Seduction is an almost startling progression.  Recorded with the same five-man lineup as Thief and with bassist John Collins producing his third consecutive Destroyer album, Streethawk bests its predecessors in production, performance, and composition.  The labyrinthine, hyper-erudite lyrical style for which Bejar would become well known is in full flight here, each song a dense expository exercise.  Many of the arrangements are propelled by piano; along with Bejar’s emotive, high-pitched nasal croon, this lends the jauntier portions of the album a Tin Pan Alley feel.  Much of the album appears to address the music business.  “Express your bloated self/Willful and indignant/In the face of somebody’s lord,” he sings on the refrains of The Sublimation Hour, an abstruse depiction of relations with a label boss; English Music addresses the futility of a budding songwriter (“Write your English music/Though you know it will come to no good”).  A handful of the songs are primarily acoustic, especially on side two, but the album’s most sparkling moments come with the full band arrangements.  Bejar often peppers his lyrics with cultural references, frequently recontextualized so that they barely register as such; this is more prominent than ever on Streethawk.  A variety of bands, films, and other artists’ songs are addressed; the most dramatic instance comes in the extended coda of the seven-minute The Bad Arts with the repeated line “You got the spirit/Don’t lose the feeling,” paraphrasing the climax of Joy Division’s ’79 song Disorder.  A full analysis of the album’s allusions would require an essay of its own.  His final album before signing to Merge, the label that would remain his home into the Teens, Streethawk: A Seduction is an early Destroyer classic that established Bejar as a serious contender for indie rock’s songwriting crown.  Remastered and reissued by Merge in ’10 after a gap in availability, it is Bejar’s first essential work.

Highlights: The Sublimation Hour, Beggars Might Ride, The Crossover, Streethawk I

Sublime bit: When the guitar solo kicks in at 3:29 of The Bad Arts, presaging the vocal melody of the song’s Joy Division-quoting coda.

Read the NOYOUCMON mission statement here.
Posted by noyoucmon at 1:20 AM