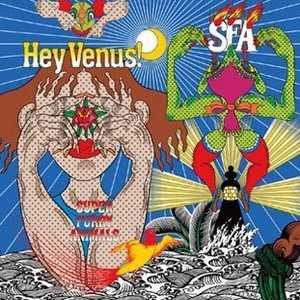 Welsh psych-poppers Super Furry Animals began the Aughts in transition.  Their label, Creation, closed in ’99 shortly after declining to release their fourth LP Mwng.  The band had sung in English since their second release, the ’95 EP Moog Droog, in an effort to expand their audience; after three well-received albums that flirted with Britpop, allowing them a few chart successes, the Super Furries opted for a stripped-down, self-made LP in their native tongue.  Released in ’00 on their own Placid Casual imprint, Mwng achieved unexpected chart success and a Parliamentary recognition for perpetuating the Welsh language.  This linguistic tribute to the homeland would be short lived.  The group soon gained major distribution through Sony, and Mwng’s follow-up, Rings Around the World (’01), was back to English; it boasted an increased budget, a guest spot from Paul McCartney on nearly inaudible sound effects (the group had worked with him the year before on the experimental Liverpool Sound Collage album), and the flair of being the first album simultaneously released as a long-form video on DVD.  The band’s ’90s work is energetic and sprightly, inspired by ’60s psychedelic pop yet retaining a nervy edge, the affinity for impish wordplay and translingual puns intact since the days of the all-Welsh group Ffa Coffi Pawb from which Super Furry Animals emerged.  The slightly mellower pace that began with Mwng continued through most of the group’s Aughts work, often serenely soulful though still possessing electronic-filled, wall-of-sound production tricks and spirited, fluent genre-hopping that ensure each album has its share of inventive and exciting tunes.

Just as Creation’s dissolution sparked a shift in band dynamics, the conclusion of their Sony contract resulted in a new approach.  Signing to Rough Trade for their eighth LP, Hey Venus!, the band shifted strategy in several areas: production (replacing the previous two albums’ Mario Caldato, Jr., with David Newfeld); cover art (the first time since their ’96 debut LP that Pete Fowler didn’t handle the design); and, most importantly, a shift back to the high-spirited pop antics of their early days.  Hey Venus! opens with the 43-second The Gateway Song, a barreling little ditty announcing itself to be “a numero uno singalong” that “brings us up nicely to the harder stuff,” before crashing into the breakup song Run-Away, a sonic update of boom-sha-la ’60s girl-group sounds with frontman Gruff Rhys opening with the recitation “This song is based on a true story, which would be fine if it wasn’t autobiographical” before a grieving session including the crooned lament “I still recall your banking details.”  This frivolity continues on song like Neo Consumer, a wild glam stomper punctuated by a whooping refrain; it concludes, “I believe in death after life/Switch off the light/Bye! Bye!”  Baby Ate My Eightball employs an absurd lyric about an infant who swallows someone’s drug stash, and while the topic is grimly unsavory the funky, near-disco arrangement makes it the album’s resident dance blast.  The album offers more than just nutty romps; a handful of songs, most notably The Gift That Keeps Giving and the closing number Let the Wolves Howl at the Moon, are lovely down-tempo excursions. The band’s shortest LP by far at a breezy 36 minutes, Hey Venus! is also their most fun and a highlight of the Super Furry Animals’ Aughts catalog.

Sublime bit: When Rhys shifts tempo ever so briefly during the closing chorus of bubbly pop-ballad showcase Show Your Hand, at 2:26.

Read the NOYOUCMON mission statement here.
Posted by noyoucmon at 1:27 AM