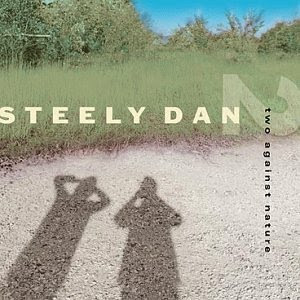 It seemed nutty enough when, following some production collaborations, jazz-rock studio mavens Steely Dan regrouped for a ’93 concert tour to support frontman Donald Fagen’s then-current second solo LP Kamakiriad, playing their first shows since ’74 and making first use of the Dan name since their final (and weakest) album, the ’80 Gaucho.  The group, swollen with session players and dubbed “The Steely Dan Orchestra,” opened shows with a Muzak-style medley of Dan hits before easing into a set including tunes from Fagen’s and guitarist Walter Becker’s solo work.  This occasionally went beyond the sound of the group’s pristine, painstaking ’70s albums and into dullness, captured on the aseptic tour souvenir Alive in America (’95).*  Kamakiriad was a pale shadow of Fagen’s first solo effort, the excellent ’82 The Nightfly; and Becker’s debut solo turn, 11 Tracks of Whack (’94), is the abomination of the Dan cosmology.  Considering these inauspicious resurfacings, the notion of strong new Steely Dan product in the Aughts would have been a fool’s wager.  It would have been no stretch to imagine the routinely out-of-touch Grammys bestowing an award on the reunited pair, out of simple familiarity; it was one of the most shocking music-biz turns of the decade, then, when their 2000 reunion album Two Against Nature beat out hot items Eminem and Radiohead’s Kid A to win Album of the Year (and three other awards)—and actually deserve it.  For those who hadn’t heard the album, it was easy to presume this a Grammy blooper on the level of Jethro Tull’s notorious ’89 defeat of Metallica in the Hard Rock/Metal category; the reality, though, is that Two Against Nature is the best work from the Fagen/Becker camp since The Nightfly and the finest Steely Dan album since the 1977 classic Aja.

The reunion album’s main strength is its compositions.  Kamakiriad and Gaucho are both too heavy on forgettable numbers short on hooks, and their flawless studio craftsmanship and light-jazz habits push the lesser material into elevator-music territory.  Two Against Nature is impeccably played, courtesy of nearly thirty session musicians, yet its delivery is never dull.  The planning of a high-level prank in Gaslighting Abbie, the syncopated funk of the title track’s voodoo exorcism, and the exhilaration of an undoubtedly inappropriate romance in Almost Gothic provide compelling narratives.  Almost Gothic lends its enthralled narrator additional zing by giving each chorus a different lyric about the antagonist ingénue and an upward key change with each cycle.  The grind of everyday life punctuated by long-anticipated romantic moments dominates: What a Shame About Me finds an unfulfilled bookstore employee accidentally reconnecting with an old flame; in West of Hollywood the suburban narrator, whose regular life finds him “way deep into nothing special,” recalls “She reached out for my hand/While I watched myself lurch across the room.”  The naughty but good-natured romp Cousin Dupree scored its own Grammy songwriting award, though it does pale alongside its more nuanced companions here.  Steely Dan released only one more Aughts album, Everything Must Go (’03), yet toured for much of the decade focusing mainly on the classic ’70s material; two more solo LPs followed (Fagen’s ’06 Morph the Cat and Becker’s ’08 Circus Money, both improvements on their respective predecessors).  Each of these albums is adequate and will attract diehard fans; it is Two Against Nature, though, issued just two months into the decade, that holds up the best and delivers the finest material of the unexpected second incarnation of Steely Dan.

* I saw the group's Chicago-area gig in August 1993 and found it a largely soulless display of Dan-by-numbers.  Fagen explained in an interview at the time, when asked if playing his old songs stirred up any feelings, that he preferred to operate detachedly and with no emotional investment during the reunion gigs—if memory serves, he described his method as "laser thinking," though I can't track down the specific interview (which I recall as being in Musician magazine).  Steely Dan's press kits are awash with pranks and piss-takes, but even if this was another instance of intentional silliness it seemed to ring true during their initial comeback.

Read the NOYOUCMON mission statement here.
Posted by noyoucmon at 2:50 AM