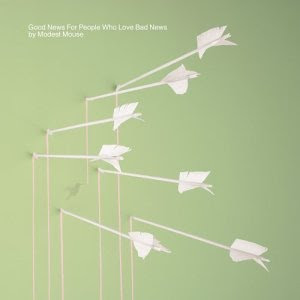 Major-label deals for indie rockers didn’t come as thick and fast in 2000 as they had ten years prior.  It was with some surprise, then, when in that year suburban Seattle’s Modest Mouse wound up on Epic Records.  Since 1994, the group had recorded two full-lengths and four EPs for a smattering of labels including Washington state’s K and Up.  These records emphasized a staccato guitar sound, unpredictable chord changes, and the odd drift into experimental sonics; their most distinctive element, though, has always been the voice of singer/guitarist Isaac Brock.  While capable of straight, melodic singing--sometimes almost like a huskier Daniel Johnston--the raspy-voiced Brock often uses a twitchy, nearly strangulated delivery prone to howls and shouts.  Brock’s lyrics are complexly arranged and often avoid typical verse/chorus structure; alongside the intricate music, this can make for a somewhat claustrophobic effect.  The band’s first Epic effort and third full-length, The Moon & Antarctica (’00), is a dense, hour-long album with an expanded aural palette and a more introspective, melancholy feel than their other material.  It was successful enough to warrant an Epic release of associated tracks, outtakes, and demos, the ’01 EP Everywhere and His Nasty Parlour Tricks, even though half of that material was previously released on the indie EP Night on the Sun.

Modest Mouse’s fortunes grew even further with their second Epic full-length, Good News for People Who Love Bad News; on the back of unlikely hit single Float On, the album went platinum in just four months.*  Their shortest LP to date at just 48 minutes (its predecessors averaged nearly 70), it is also the brightest and liveliest.  The band now grown to a quartet (and without longtime drummer Jeremiah Green, who would return later in ’04), the instrumentation expanded to include mellotron, pump organ, timpani, and other accents.  The album opens with a ten-second fanfare performed by New Orleans legends Dirty Dozen Brass Band.  The simple nursery-rhyme cadence of the first proper song, The World at Large, eases the listener into the album before third track Float On’s jaunty ode to optimism.  No plain “don’t worry, be happy” embarrassment, its characters get fired, collide with police cars, get scammed by hustlers, and lip off to friends; silver linings prevail, Brock ensuring us “We’ll all float on OK.”  The buoyant second single Ocean Breathes Salty boasts an even poppier score.  A good portion of the album is given to jolly if skewed arrangements; Dance Hall is a frantic stomp, Bukowski an accordion-sweetened lament on bad behavior, and This Devil’s Workday a sinister march backed by the Dirty Dozen.  Closing track The Good Times Are Killing Me features contributions from the Flaming Lips, who also mixed the track.  The sequencing and departure from the band’s usual epic running times is a key asset for Good News, avoiding the listener fatigue marring the group’s other strong releases.  The album’s exceptional follow-up, the ’07 We Were Dead Before the Ship Even Sank, saw the unexpected addition of former Smiths guitarist Johnny Marr; though lacking the conviviality of Good News, it is arguably an even stronger album.  The Moon & Antarctica is regarded by many fans as the high-water mark** (also garnering an expanded and remixed ’04 reissue and a 2010 deluxe vinyl reissue); despite all this, at decade’s end Good News for People Who Love Bad News remained the band’s most accessible, enjoyable work.

* See the RIAA database at http://www.riaa.com/goldandplatinum.php.

Highlights: Ocean Breathes Salty, Bury Me With It, Float On, The View

Sublime bit: The tense build-up and resolution of penultimate track One Chance, running from 1:36 to 1:58.