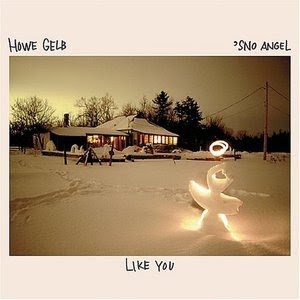 When people discuss “Americana” music, the tendency is to think of southern-based, country-inspired tunes--fiddles, twang, the high and lonesome sound.  Howe Gelb may be based in Arizona and his music more evocative of the desert and the sparse southwest, but his work since 1985—solo, collaborative, and with his primary group Giant Sand—qualifies him as one of the longest-running purveyors of Americana.  No stranger to electrified rock yet frequently operating acoustically, Gelb’s labyrinthine catalog covers wide swaths of styles from loose-limbed, rootsy boogie to albums of piano-based instrumentals; he often plays by feel rather than running through deliberately charted material.  He has a penchant for revisiting old works, including reissuing albums with new cover art, titles, and reassembled track listings.  Select any record at random, though, and it will contain at least a handful of rough-hewn gems.  It is this sense of reliability that makes his ’06 album ’Sno Angel Like You all the more special.  Standing tall among his sometimes interchangeable flood of releases, the LP is billed as a solo record—his twelfth, if one counts everything from fan-club items to digital-only EPs—but is notable for featuring Ottawa, Ontario’s Voices of Praise Gospel Choir.  Invited to a blues festival there in ’03, Gelb was transfixed when he saw the choir perform.  Asking their director, Steve Johnston, if it would be possible to record secular music with them, the response was, “Sure, if you keep it positive!”

Gelb took his work with the ten-person, co-ed choir as an opportunity for new music and for reworkings of Giant Sand tunes from as early as ’88, as well as three solo tunes by Gelb’s late best friend, longtime collaborator, and occasional Giant Sand member Rainer Ptacek.  Though presented as a secular record, much of 'Sno Angel contains inspirational messages.  Gelb had long held bigger ideas for some of this material; an earlier version of Get to Leave, from the ’95 Giant Sand oddities LP Backyard Barbeque Broadcast, opens with Gelb saying, “This is a gospel song,” though it resembled nothing of the sort.  'Sno Angel opens almost tentatively with a new version of this tune, carried by a barely-there guitar plucking and a gentle percussive time-keeping, the choir contributing understated harmonies on the choruses; they break into laughter at the end, giving some idea of the good times had during these sessions.  Rather than remaining locked in the full-bore, ecstatic overkill that sometimes plagues modern gospel, Voices of Praise contributes effective accents to the songs: in But I Did Not, they provide a countervocal, following each of Gelb’s accounts of nearly committed sins with a tempered singing of the title; their work in Hey Man and Love Knows (No Borders) is pure soul balladry; the slinky groove of That’s How Things Get Done finds them adding nearly sensual ah-oos before delivering the soulful R&B choruses.  A handful of tunes afford them more traditional gospel-choir duties, the finest being the funky Howlin’ a Gale; the hardest-rocking tune here, it features Gelb on ripping electric guitar and full-throated choruses from the choir.  Those seeking more should check out ’Sno Angel Winging It (Live), an excellent ’09 CD/DVD combo featuring an ’06 Ottawa gig including material from the studio album, one new tune, and yet more reworked Giant Sand songs.  Gelb’s work with Voices of Praise may have been a one-off, but more music from this bountiful collaboration would be welcomed.

Highlights: Howlin’ a Gale, But I Did Not, Neon Filler, That’s How Things Get Done

Sublime bit: The swelling build-up to the first glorious chorus of Howlin’ a Gale, beginning at 1:53.

Read the NOYOUCMON mission statement here.
Posted by noyoucmon at 1:17 AM