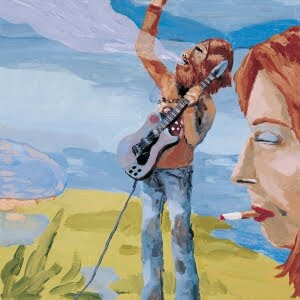 The eponymous debut of Loose Fur, a trio comprising Jeff Tweedy of roots titans Wilco, experimental composer/producer Jim O’Rourke, and indie art-rock drummer Glenn Kotche, came two and a half years after its recording.  In the interim, Wilco endured their record label’s notorious rejection of the ’02 album Yankee Hotel Foxtrot, its eventual release and widespread acclaim, and a line-up change including Kotche’s replacement of longtime drummer Ken Coomer.  The polarization of Wilco’s sound that came with the aggressively experimental Foxtrot made it easy to presume Loose Fur an offshoot of Tweedy’s newfound sonic adventuring; but, it was the other way around.  An unexpected meeting with O’Rourke and Kotche galvanized Tweedy after his increasing dissatisfaction with early Foxtrot sessions.  Invited in May ’00 to perform with an artist of his choosing at Chicago’s Noise Pop Festival, longtime art-music buff Tweedy picked O’Rourke after his recent discovery of the composer’s ’97 album Bad Timing.  O’Rourke suggested including his friend Kotche, and festival rehearsals were so productive that before the live show the three had worked up the skeleton of what would become their debut album.*  Like Bad Timing, which consists of four lengthy instrumentals, Loose Fur finds inspiration in extended soundscapes.  Its six songs running as long as nine minutes, the album takes cues from not only the conceptual work of O’Rourke and Kotche but also from Tweedy’s pop sensibilities and the singer-songwriter tradition occasionally explored by O’Rourke in his solo material (cf. his ’01 LP Insignificance, much of which features the other members of Loose Fur).

Opening cut and aborted Wilco number Laminated Cat begins with O’Rourke’s atmospheric effects and a minimal, mid-tempo Kotche bass-drum beat with skittering handheld percussion.  A detached Tweedy vocal enters nearly a minute later with the ominous line, “Springtime comes and the leaves are back on the trees again/The snipers are harder to see, my friends.”  At the midway point Tweedy’s vocal ends and a cyclical, nearly Krautrock bass-and-guitar groove kicks in; the remainder of the seven minutes focuses on this riff and its variations.  Album closer and third Tweedy vocal Chinese Apple begins as a delicate folk piece with finger-picked acoustic guitar, then bleeds into a two-minute noise interlude before a reprise of the vocal melody and gentle conclusion augmented by a stripped-down O’Rourke piano line.  Liquidation Totale, an instrumental with a banjo part and herky-jerky guitar motif, wends through several short movements before a cacophonous finale.  O’Rourke delivers two lead vocals; Elegant Transaction is a startling replica of ‘70s adult contemporary subverted by lyrics such as “Like urine loves cold slate.”  So Long, draped on a dirge-paced lyric about alienation, is the album’s most avant-garde piece and a percussion showcase for Kotche, a rare rock drummer creative enough to perform compelling solo gigs.  His innovative performance here seems to spur on Tweedy, who contributes equally inspired and challenging electric guitar improvisation before the song concludes with a bucolic “da-da-da” vocal coda from O’Rourke.  The group released a second Aughts LP, the more pop-based and less memorable ’06 Born Again in the USA. The trio’s debut is the keeper.  A challenging oddity, it facilitated Tweedy’s creative rebirth yet stands as a substantial, rewarding piece of new American modernism in its own right.

* For a thorough overview of the collaboration's origins and eventual impact on Tweedy's main band, see chapters 15-16 of Greg Kot's strong biography Wilco: Learning How to Die (Broadway Books, 2004).

Sublime bit: That hypnotic groove in the second half of Laminated Cat, especially from 3:35 to 4:45.