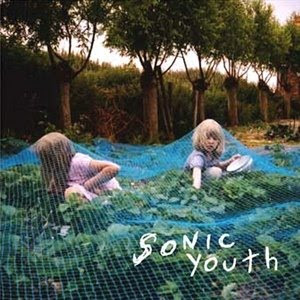 By ’00, noise-rock veterans Sonic Youth had long straddled two worlds--the avant-garde community; and, through its long-term contract with Geffen Records, the pop music scene, MTV, and the mainstream press.  In ’97, the group began a series of experimental, improvisational recordings called Musical Perspectives*, released on their own SYR label and providing a catalog running parallel to their “pop” releases.  By the end of the Nineties, they had released four volumes.  The third, the hour-long, three-song ’98 Invito Al Cielo, was billed to Sonic Youth/Jim O’Rourke.  A longtime producer and musician also active in the pop and underground music communities, O’Rourke became a fixture on nearly all of their releases until joining the band as a full-fledged member in ’01.  His tenure would be limited, leaving the group in ’05, but Sonic Youth recorded two studio albums with him in the line-up; the first of these, Murray Street, is one of the best of the group’s five mainstream Aughts albums.

Sonic Youth titled their ’00 Geffen album NYC Ghosts & Flowers; continuing this contemplation of their home base, they named twelfth full-length Murray Street for the location of their studio.  The 9/11 terror attacks interrupted recording; located three blocks from Ground Zero, the studio sustained some damage.  Though much of the album was written before the disaster, a mixture of sadness and determination informs many songs.**  While Ghosts & Flowers was a spartan and tense but hushed affair, Murray Street is a more organic recording.  The eight-minute Rain on Tin points back to the long jamming that began with the 25-minute The Diamond Sea on ’95’s Washing Machine; confident yet tempered guitar lines replace the abrasive maelstroms of their earlier material.  The song’s eight minutes consist almost entirely of a guitar jam, its clean, spiraling arpeggios reminiscent of NYC forbears Television.  The album’s centerpiece is the Lee Ranaldo contribution Karen Revisited.  A Thousand Leaves (’98) included his song Karen Koltrane, which asked “Are we still together/Will she stay forever”; Karen Revisited, a loose sequel, finds its subject damaged by fast living and peaks with the devastating proclamation of “See you/Some time?/Ask/Me/If/I/CARE!” before melting into a simmering eight-minute noise coda.  The album’s most incongruous tunes are the spasmodic Kim Gordon number Plastic Sun, the shortest song by far at just over two minutes; and Radical Adults Lick Godhead Style, featuring two members of sax-heavy noise outfit and early Sonic Youth contemporaries Borbetomagus, which could’ve fit on their ’92 noise-pop excursion Dirty.  Disconnection Notice is a rumination on the melancholy side of iconoclasm, and the Kim Gordon-sung Sympathy for the Strawberry closes the album with a pensive, almost free-form vocal marked by snatches of beautiful melody.  Inextricably linked to the tragic time in which it was created, Murray Street possesses a humanistic quality not always present on Sonic Youth recordings. It is a quiet and overlooked gem in their expansive catalog.

NOTE: On the vinyl version of the album, the sequence of the CD's third and fourth tracks, Rain on Tin and Karen Revisited, are reversed to fit everything on a single LP; the difference is not pronounced enough to recommend one format over the other.

* Informally, but more commonly, referred to as the SYR series.

** For an in-depth examination of the group's experiences in the aftermath of 9/11, see David Browne's excellent 2008 Goodbye 20th Century: A Biography of Sonic Youth (Da Capo Press), specifically pp. 353-361.

Highlights: Karen Revisited, Rain on Tin, The Empty Page, Sympathy for the Strawberry

Sublime bit: The aforementioned climax of Karen Revisited, coming at the 2:21 mark.

Read the NOYOUCMON mission statement here.
Posted by noyoucmon at 2:02 AM