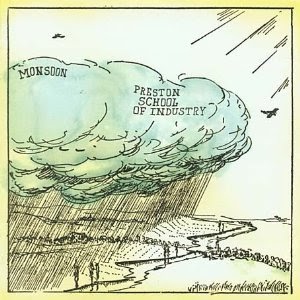 Scott Kannberg, AKA Spiral Stairs, co-founder and guitarist of Stockton, California-based erudite slacker kings Pavement, owned a sizeable batch of unfinished material after the band’s embittered ’99 dissolution.  Author and singer of fewer than a dozen of the group’s nearly two hundred songs, Kannberg brought a more linear lyrical style to Pavement that countered frontman Stephen Malkmus’s penchant for stream-of-consciousness wordplay.  Freed of the limitations of his former group, Kannberg was the only member aside from Malkmus to release solo material in the Aughts (bassist Mark Ibold worked with Free Kitten and Sonic Youth, but issued no material of his own).  In ’01, Kannberg released the EP Goodbye to the Edge City on his own Amazing Grease label; rather than use either his given or stage name, he named his new project Preston School of Industry after a notorious boys’ reform school near his hometown of Stockton.  Edge City is an engaging set of five songs ranging from the good-natured acoustic shuffle of Somethings Happen Always, with a horn part and, on the coda, a children’s chorus; to the muted introspection of How to Impress the Goddess Pt. 2; to the pop rave-up The Spaces in Between, the most ebullient track to come out of the Pavement organization thus far.  Kannberg would expand on these forms with the first PSOI full-length, All This Sounds Gas (also ’01).  The most striking aspect of Kannberg’s new music was its apparent sincerity, devoid of the sarcasm and brattiness that lent Pavement an aggravating charm yet ensured their sizeable catalog would be short on guilelessness.

The second PSOI album, Monsoon, is an even more affable outing than its predecessor.  A shorter, breezier affair, Monsoon is built on the twangy acoustic-guitar jangle seen on parts of Edge City.  Opening cut The Furnace Sun and mid-album highlight Her Estuary Twang are bright pop blasts with cheerful wordless choruses and bountiful hooks; the charming Walk of a Gurl ambles more slowly than its poppier cousins and includes a whimsical harmonica accompaniment.  So Many Ways is almost a country ballad, its gentle pedal-steel drift giving the album its most peaceful moment.  Line it Up most directly recalls Kannberg’s Pavement work (specifically his Hit the Plane Down from Crooked Rain, Crooked Rain), with its slanted, cyclical riff and hectoring vocal.  Guests on Monsoon include Scott McCaughey of the Minus 5, who plays mandolin on two tracks, and four members of A Ghost Is Born-era Wilco on the track Get Your Crayons Out!  Monsoon would be the final recording of the Aughts to bear the Preston School of Industry name.  In ’09, Kannberg reclaimed his Pavement-era stage name Spiral Stairs when he issued the LP The Real Feel.  Promotional activities for the album, a glossier and mildly bluesy effort than the loose grooves of PSOI, were interrupted by the unlikely—and wildly popular—reunion of Pavement.  While Kannberg’s solo efforts have been largely overshadowed by Malkmus’s, all have merits; Monsoon is the most pleasing of his three solo full-lengths and one of the most agreeable works in the Pavement family tree.  (The Australian Monsoon on Trifekta Records came with a second disc titled Live in Chicago 2002 Bootleg from a tour supporting Wilco.  This audience-quality recording is now more widely available via download, and is frequently mislabeled as coming from a 2003 concert.)

Highlights: Her Estuary Twang, The Furnace Sun, Caught in the Rain, If the Straits of Magellan Should Ever Run Dry

Sublime bit: The blissful exclamations of “ba-da-ba” on the choruses of Her Estuary Twang.