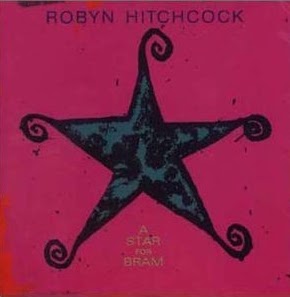 The Aughts began slowly for veteran British songwriter Robyn Hitchcock.  His Warner Bros. contract ended after three albums (including Mossy Liquor, the vinyl-only companion piece to his Moss Elixir album, both ’96), leaving him without major-label support for the first time since ’86.  Between ’00 and ’03 he quietly issued three albums on his own Editions PAF! label.  This trio included Robyn Sings, a live double album composed entirely of Bob Dylan covers, much of which had previously appeared as an extended appendix to the Warner-issued, promo-only ’97 single for his song Beautiful Queen.  The recycling of promo-only B-sides following the loss of a contract might seem an inauspicious move, were the performances not strong, sought-after material likely rejected for full release by Warner.  Two years before Robyn Sings, though, slipped another unusual album, A Star for Bram.  Released “under special license from Warner,” it arrived with the feel of a fan-club album and cover art almost replicating that of Jewels for Sophia (’99), his final Warners album.  Often diminished as a mere collection of Sophia outtakes, Bram indeed includes two songs that appeared on the Warner-issued, Sophia-supporting promotional EP entitled Rare Jewels.  While the Aughts would be Hitchcock’s most prolific decade, A Star for Bram was just one of a string of albums from the decade comprising outtakes, old material, or other oddities while masquerading as new releases.  A Star for Bram is unique among its colleagues, however, as it is arguably stronger than any of the four “real” new LPs that Hitchcock issued in the Aughts.

Bram is a tempered, darker sibling to Jewels for Sophia.  The Warner album is bright, often raucous, and comical; one can almost imagine a Warner executive opting against Bram’s less immediate songs and saying, “We want the funny songs, the ones where you talk about vegetables a lot.”  While the two albums’ most haunting song (No, I Don’t Remember Guildford) does appear on Sophia and Bram is not devoid of levity, Bram is the more subdued record.  It opens with two understated acoustic numbers; the second, the gently shimmering I Saw Nick Drake, is like a transcription of a dream, with Hitchcock meeting the long-dead British folksinger, doing chores together, and interacting in the surreal ways that only the subconscious can manifest; it is built on a transfixing repeated guitar figure and joined by Hitchcock’s highly reverbed wordless humming between the verses.  Judas Sings (Jesus and Me) and I Used to Love You are both stripped-down ballads, the latter using only voice and piano.  Bram’s electric numbers outnumber the unplugged entries, but these, too, are largely subdued.  A minimal, sax-tinted groove supports the skeletal boogie of Adoration of the City; the mild skiffle of The Philosopher’s Stone features just Jon Brion and Hitchcock, the latter adding melodic accents with a “harmony machine.”  The record’s two expository highlights are Nietzsche’s Way, its title punning on Spirit’s 1970 song Nature’s Way, and a new studio recording of Hitchcock’s nostalgic travelogue 1974, which previously appeared on the ’98 in-studio live soundtrack Storefront Hitchcock.  A final thread connecting the album to Jewels for Sophia is a dub version of that album’s Antwoman that gives the lilting original an ominous tint.  Hitchcock’s departure from the major-label system may have resulted in a circuitous new pattern of record-making, but as long as his catalog continues to generate albums as reliable as A Star for Bram it will be worth following.

Read the NOYOUCMON mission statement here.
Posted by noyoucmon at 1:50 AM